This rollicking and fascinating picture book biography chronicles the life of the first pioneer of children’s books—John Newbery himself. While most children’s books in the 18th century contained lessons and rules, John Newbery imagined them overflowing with entertaining stories, science, and games.

A collection of paintings by Jacob Lawrence chronicling the liberation of Haiti in 1804 under the leadership of General Toussaint L’Ouverture.

When his grieving father orders the destruction of the Dark Library, Victor retrieves a book in which he finds the promise of not just communicating with the dead, but entering their realm, and soon he, Elizabeth, and Henry are in the spirit world of Chateau Frankenstein, creating and growing a body.

During what seems like an ordinary museum visit, a tour guide lures Sunni and Blaise through a painted doorway-and they discover they’ve stepped into eighteenth-century London. When they realize their “tour guide” will do anything to get more information about what Sunni and Blaise know about magical paintings, they attempt to flee and encounter body snatchers, art thieves and forgers. 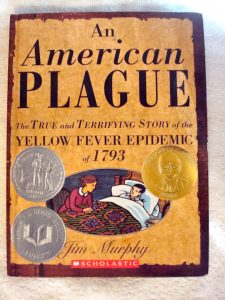 It’s 1793, and there’s an invisible killer roaming the streets of Philadelphia. The city’s residents are fleeing in fear. This killer has a name–yellow fever–but everything else about it is a mystery. Its cause is unknown and there is no cure. This powerful dramatic account by award-winning author Jim Murphy traces the devastating course of the epidemic. An American Plague offers a fascinating glimpse into the conditions in American cities at the time of our nation’s birth while drawing thought-provoking parallels to modern-day epidemics. 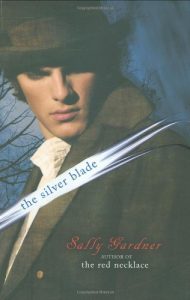 A stirring tale of magic and revolution- fans of The Red Necklace won’t want to miss it. The year is 1794. With his beloved Sido safely in England and the Reign of Terror at its height, mysterious Yann returns to revolutionary France to smuggle out aristocratic refugees who will otherwise face the guillotine. But while the two are apart, Yann’s Gypsy origins prejudice Sido’s guardian against their marriage, thwarting their longed-for reunion. When Sido is kidnapped under strange circumstances, however, Yann must use all his strength and courage to outwit the evil Count Kalliovski, rescue Sido, and help save all of France.

Samurai fear nothing, not even death. They are loyal and brave. Fourteen-year-old Seikei has studied the way of the samurai, and would like nothing more than to be one. But a samurai is born, not made; Seikei was born the son of a tea merchant, so a merchant he must be. But when a priceless ruby intended for the shogun-the military governor of Japan-is stolen by a ghost, Seikei finds himself having to display all the courage of a samurai. Seikei is the only person to have seen the thief, and now the famous magistrate, Judge Ooka, needs the boy\’s help to solve this mystery. Can the son of a merchant prove himself worthy to the shogun himself?

Samurai Seikei and Judge Ooka, his foster-father, seek seven men who have seven maps on their backs in order to locate a cache of dangerous weapons before they fall into the wrong hands.

Panic fills the streets of London on a night in 1756 when the earth suddenly lurches forward and starts spinning out of control. Within moments, eleven days and nights flash through the sky, finally leaving the city in total darkness. Is the end of the world at hand? Agetta Lamian fears so. She’s the young housemaid of Dr. Sabian Blake, a scientist who has recently acquired the Nemorensis, the legendary book said to unlock the secrets of the universe. And what he sees through his telescope confirms what he has read: This disaster is only a sign of things to come. Agetta overhears Dr. Blake’s prophecy that a star called Wormwood is headed toward London, where it will fall from the sky and strike a fatal blow. Dr. Blake believes the comet will either end the world as he knows it or hearken a new age of scientific and spiritual enlightenment. Soon even Agetta seems to have been seduced by the book, and whom she ultimately delivers it to will determine much more than just her fate.

Clever and head-turningly attractive, fourteen-yearold Yann is an orphan who has been raised in Paris by Têtu, a dwarf with secrets he has yet to reveal to the gypsy boy. It’s the winter of 1789, and the duo have been working for a vain magician named Topolain. On the night when Topolain’s vanity brings his own death, Yann’s life truly begins. That’s the night he meets shy Sido, an heiress with an ice-cold father, a young girl who has only known loneliness until now. Though they have the shortest of conversations, an attachment is born that will influence both their paths. And what paths those will be! Revolution is afoot in France, and Sido is being used as a pawn. Only Yann will dare to rescue her, and he’ll be up against a fearful villain who goes by the name Count Kalliovski, but who has often been called the devil. It’ll take all of Yann’s newly discovered talent to unravel the mysteries of his past and Sido’s and to fight the devilish count.