When living in the Alaskan wilderness with her survivalist father becomes intolerable, 12-year-old Willa sets out on a journey of escape with her younger brothers.

Less than forty-eight hours after twelve-year-old Chris sets off on a sailing trip down the Alaskan coast with his uncle, their boat sinks. The only survivors are Chris and a boy named Frank, who hates Chris immediately. Chris and Frank have no radio, no flares, no food. Suddenly, they’ve got to forage, fish, and scavenge the shore for supplies. Chris likes the company of a curious, friendly raven more than he likes the prickly Frank. But the boys have to get along if they want to survive. 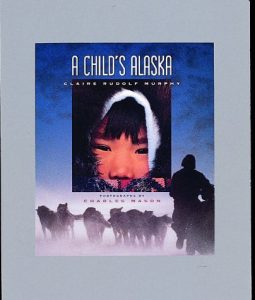 A year-round look at Alaska that describes its climate and wildlife as well as the different life-styles of its people and their children. 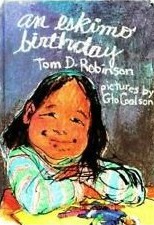 Young Eeka lives in Point Hope, Alaska, well above the Arctic Circle where there is little daylight during the winter months. It’s her birthday and Eeka is hoping that her mother may have found the right fur for the newly made velveteen parka that her mother has just made for her. However, with the coming of a storm, her attention moves towards the safety of her father who may be caught in the great winter storm that has developed while checking his traps. From Eeka escorting her younger cousin home from school, to the stories of survival and legend told by Eeka’s grandfather, young (and older) readers will be introduced to a bit of Eskimo culture. Lastly, Glo Coalson’s lovely and descriptive illustrations are integral to the book.

There’s
more to me than
most people
see.

Twelve-year-old Willow would rather blend in than stick out. But she still wants to be seen for who she is. She wants her parents to notice that she is growing up. She wants her best friend to like her better than she likes a certain boy. She wants, more than anything, to mush the dogs out to her grandparents’ house, by herself, with Roxy in the lead. But sometimes when it’s just you, one mistake can have frightening consequences . . . And when Willow stumbles, it takes a surprising group of friends to help her make things right again.

Using diamond-shaped poems inspired by forms found in polished diamond willow sticks, Helen Frost tells the moving story of Willow and her family. Hidden messages within each diamond carry the reader further, into feelings Willow doesn’t reveal even to herself. 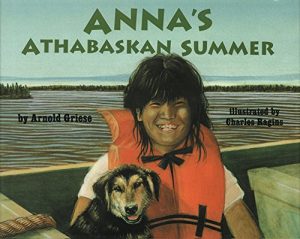 The everyday lives of the Athabaskan Indians come to life in the story of Anna’s family and their annual journey to a salmon fish camp as they remember the ways of their people by listening to Grandmother’s wise words.

The death of their drunken father strands ten-year-old Toughboy and his younger sister at a remote fishing cabin on the Yukon River near Ruby, Alaska, where they spend a summer trying to cope with dwindling food supplies and hostile wildlife.

The Tlingit Indians of southeastern Alaska are known for their totem poles, Chilkat blankets, and ocean-going canoes. Nora Marks Dauenhauer is a cultural emissary of her people and now tells the story of her own life within the context of her community’s. Life Woven with Song re-creates in written language the oral tradition of the Tlingit people as it records memories of Dauenhauer’s heritage–of older relatives and Tlingit elders, of trolling for salmon and preparing food in the dryfish camps, of making a living by working in canneries. She explores these recurring themes of food and land, salmon and rainforest, from changing perspectives–as a child, a mother, and a grandmother–and through a variety of literary forms. In prose, Dauenhauer presents stories such as “Egg Boat”–the tale of a twelve-year-old girl fishing the North Pacific for the first time alone–and an autobiographical piece that reveals much about Tlingit lifeways. Then in a section of short lyrical poems she offers crystalline tributes to her land and people. In a concluding selection of plays, Dauenhauer presents three Raven stories that were adapted as stage plays from oral versions told in Tlingit by three storytellers of her community. These plays were commissioned by the Naa Kahidi Theater and have been performed throughout America and Europe. They take the form of a storyteller delivering a narrative while other members of the cast act and dance in masks and costumes. Collectively, Dauenhauer’s writings form an “autoethnography,” offering new insight into how the Tlingit have been affected by modernization and how Native American culture perseveres in the face of change. Despite the hardships her people have seen, this woman affirms the goodness of life as found in family and community, in daily work and play, and in tribal traditions.

Ride shotgun with the heroic mushers whose bravery inspired the Iditarod. In the winter of 1925, Nome, Alaska, was hit by an unexpected and deadly outbreak of diphtheria. Officials immediately quarantined the town, but the only cure for the community of more than 1,400 people was antitoxin serum and the nearest supply was in Anchorage—hundreds of miles of snowbound wilderness away. The only way to get it to Nome was by dogsled. Twenty teams braved subzero temperatures and blizzard conditions to run over 600 miles in six days in a desperate relay race that saved the people of Nome. Several of the dogs, including Togo and Balto, became national heroes. Today their efforts, and those of the courageous mushers, are commemorated every March by the Iditarod Trail Sled Dog Race. Jon Van Zyle’s stunning oil paintings capture the brutal conditions, pristine wilderness, and sheer guts and determination demonstrated by the heroic mushers and dogs.

For Native children, growing up in Alaska today means dwelling in a place where traditional practices sometimes mix oddly with modern conveniences. “Children of the Midnight Sun” explores the lives of eight Alaskan Native children, each representing a unique and ancient culture. This extraordinary book also looks at the critical role elders play in teaching the young Native traditions. 40 color photos.