When a boy struggles after moving to a Japanese internment camp during WWII, baseball shows him another way to approach life. Sandy Saito is a happy boy who reads comic books and is obsessed with baseball — especially the Asahi team, the pride of his Japanese Canadian community. But when the Japanese attack Pearl Harbor, his life, like that of every other North American of Japanese descent, changes forever. His family is forced to move to a remote internment camp, and his father must spend months away from them. Sandy, his mother and his brother cope as best they can with the difficulties at the camp. Over time, Sandy comes to realize that life is a lot like baseball. It’s about dealing with whatever is thrown at you, however you can.

Told in two voices, ballet dancer and private school student Isabelle Warren and poet and baseball star Alex Rosario grow closer after meeting on a subway, bonding over their parents’ expectations and their own dreams.

Sophia Garcia, thirteen, wants to excel at softball like her older sister, Ellie, and make her family proud, but when she is chosen for a different team and position than Ellie, she must learn to succeed by being herself.

Nine-year-old Maria Singh learns to play softball just like her heroes in the All-American Girls’ League, while her parents and neighbors are struggling through World War II, working for India’s independence, and trying to stay on their farmland. 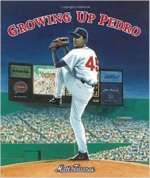 Before Pedro Martínez pitched the Red Sox to a World Series championship, before he was named to the All-Star team eight times, before he won the Cy Young three times, he was a kid from a place called Manoguayabo in the Dominican Republic. Pedro loved baseball more than anything, and his older brother Ramon was the best pitcher he’d ever seen. He’d dream of the day he and his brother could play together in the major leagues, and here, Matt Tavares tells the story of how that dream came true.

Presents profiles of fourteen Latino baseball players who, from 1900 through the 1960s, were pioneers of the sport in their home countries and the United States.

When Mr. Zinger’s hat flies in and interrupts Leo’s playing, the two of them construct a story as to how exactly the hat took off.

In Brooklyn in 1951, a die-hard Giants fan teaches nine-year-old Maggie, who is a “Bums” (Dodgers) fan, how to keep score which creates a special friendship between them. 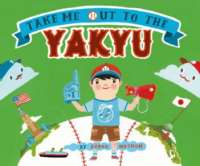 A little boy’s grandfathers, one in America and one in Japan, teach him about baseball and its rich, varying cultural traditions.