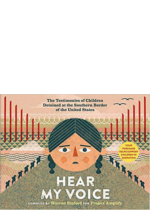 Hear My Voice/Escucha mi voz shares the stories of 61 these children, from Honduras, Guatemala, El Salvador, Ecuador, and Mexico, ranging in age from five to seventeen—in their own words from actual sworn testimonies. Befitting the spirit of the project, the book is in English on one side; then flip it over, and there’s a complete Spanish version. 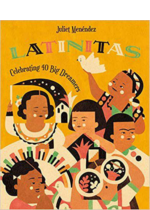 Discover how 40 influential Latinas became the women we celebrate today! In this collection of short biographies from all over Latin America and across the United States, Juliet Menéndez explores the first small steps that set the Latinitas off on their journeys. With gorgeous, hand-painted illustrations, Menéndez shines a spotlight on the power of childhood dreams.

Space-obsessed 12-year-old Paola Santiago and her two best friends, Emma and Dante, know the rule: Stay away from the river. It’s all they’ve heard since a schoolmate of theirs drowned a year ago. Pao is embarrassed to admit that she has been told to stay away for even longer than that, because her mother is constantly warning her about La Llorona, the wailing ghost woman who wanders the banks of the Gila at night, looking for young people to drag into its murky depths.Hating her mother’s humiliating superstitions and knowing that she and her friends would never venture into the water, Pao organizes a meet-up to test out her new telescope near the Gila, since it’s the best stargazing spot. But when Emma never arrives and Pao sees a shadowy figure in the reeds, it seems like maybe her mom was right. . . . Pao has always relied on hard science to make sense of the world, but to find her friend she will have to enter the world of her nightmares, which includes unnatural mist, mind-bending monsters, and relentless spirits controlled by a terrifying force that defies both logic and legend.

Told in rhyming verse, this is the touching true story of an oil-soaked penguin, the man who rescues him and an unlikely friendship.

Zane Obispo has been looking forward to his training at the Shaman Institute for Higher Order Magic, and not only because it means he’ll be reunited with his best friend, Brooks. Anything would be better than how he has spent the last three months: searching for the remaining godborns with a nasty demon who can sniff them out (literally). But when Zane tracks down the last kid on his list, he’s in for a surprise: the “one” is actually a pair of twins, and they’re trying to prevent a mysterious object from falling into the wrong hands. 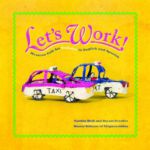 Cynthia Weill scores again with an early concept book that bring every kind of job to life, including the work of the dedicated palm weavers of Flavio Gallardo’s workshop, whose miniature palm weavings illustrate this playful book, teaching children words for work in two languages. The weavers live in the village of Chigmecatitlán in the Mixteca part of the Mexican state of Puebla. With tremendous skill and patience, the artisans of this region practice palm weaving, a craft which came to Mexico even before the arrival of the Spanish in the early 15th century. Imagine being able to hold all of the illustrations in one book in the palms of your hands. You can do that with the tiny weavings in Let’s Work. Most pieces are no larger than a dime!

Inspired by Hispanic folklore, legends, and myths from the Iberian Peninsula and Central and South America, this bold sequel to Charlie Hernández & the League of Shadows, which Booklist called “a perfect pick for kids who love Rick Riordan” in a starred review, follows Charlie as he continues on his quest to embrace his morphling identity. Charlie Hernandez still likes to think of himself as a normal kid. But what’s normal about being a demon-slaying preteen with an encyclopedic knowledge of Hispanic and Latino mythology who can partially manifest nearly any animal trait found in nature? Well, not much. But, Charlie believes he can get used to this new “normal,” because being able to sprout wings or morph fins is pretty cool. But there is a downside: it means having to constantly watch his back for La Mano Peluda’s sinister schemes. And when the leader of La Liga, the Witch Queen Jo herself, is suddenly kidnapped, Charlie’s sure they’re at it again. Determined to save the queen and keep La Liga’s alliances intact, Charlie and his good friend Violet Rey embark on a perilous journey to track down her captors. As Charlie and Violet are drawn deeper into a world of monstruos and magia they are soon left with more questions than answers—like, why do they keep hearing rumors of dead men walking, and why is Charlie suddenly having visions of an ancient evil: a necromancer priest who’s been dead for more than five centuries? Charlie’s abuela once told him that when dead men walk, the living run in fear. And Charlie’s about to learn the truth of that—the hard way.

Ancient Night combines many short stories from the oral tradition, like the one of the bunny and the possum, as well as the invented rivalry between the two that serves to tell the story of what happens at night behind the maize: the adventures of a hard-working bunny and an audacious possum that come and go through the field, making the moon change its appearance and the night transform into day. This silent album is inspired in the complex and monumental Middle American thinking, which conceives the origin of things in a dual way; due to this, the also illustrator of The well of the mice represents multiple dualities, like the day and night, life and death, down and up, darkness and light, among others that when putting them with their opposite they maintain the balance.

When Zezé grows up, he wants to be a poet in a bow tie. For now the precocious young boy entertains himself by playing clever pranks on the residents of his Rio de Janeiro neighborhood, stunts for which his parents and siblings punish him severely. Lately, with his father out of work, the beatings have become harsher. Zezé’s only solace comes from his time at school, his hours secretly spent singing with a street musician, and the refuge he finds with his precious magical orange tree. When Zezé finally makes a real friend, his life begins to change, opening him up to human tenderness but also wrenching sorrow. Never out of print in Brazil since it was first published in 1968, My Sweet Orange Tree, inspired by the author’s own childhood, has been translated into many languages and has won the hearts of millions of young readers across the globe.

A group of witches fly at night on their broomsticks. Unfortunately one of them in very clumsy and always falls behind. A scarecrow, who has witnesses all of the witches mishaps, decides to help her continue on her journey. He makes a special broom for her with straw from his body in the hope that she will ride it safely and without any more trouble.