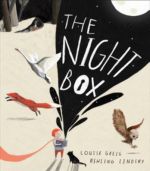 When a little boy opens the Night Box, darkness swoops out, a fox uncurls, and a thousand stars sparkle and shine. Night flows freely then, cavorting and exploring, caring for all its creatures until morning comes, and it’s time for Night to rest again. With its soothing cadences and air of quiet wonder, The Night Box is sure to charm any sleepy listener who wonders what happens between sunset and sunrise. 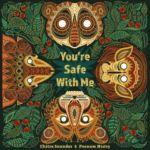 When the moon rises high and the stars twinkle, it is bedtime for the baby animals of the Indian forest. But tonight, when the skies turn dark and the night grows stormy, the little ones can’t sleep. SWISH-SWISH! CRACK-TRACK! FLASH-SNAP! goes the storm. Only Mama Elephant with her words of wisdom can reassure them.

In this delightful bedtime rhyme a young child bids good night to the moon, recalling all the familiar things surrounding her, from her pillow, her book, and her kitten to the swing outside, the robins in the trees, and the starry night. 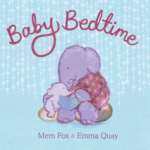 After all the kissing and the hugging and the rocking and the snuggling, there at last comes a time for sleeping. 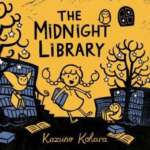 “Once there was a library that only opened at night. Step inside and meet the little librarian and her three assistant owls”–

Anna Banana can’t settle down tonight, even though her stuffed animal friends are tired and just want to sleep. They suffer through delay after delay and excuse after excuse, until Anna Banana is finally sleepy. And then, it’s time for their revenge! Her stuffed animals decide to teach her a lesson about respecting others at bedtime.

Tune in as a father reads his children a bedtime story about the exploits of two villains, Filth and Vacuum, and their wicked plan to suck all the money out of the banks and cover everything with muck and slime. Who is strong enough to save the world? Not Steel Man, nor Flying Through the Air Very Fast Man, nor even Incredible Big Strong Green Man. It may just be a job for clever young Brad Forty, who transforms himself into . . . Extremely Boring Man! His superpower is making people fall asleep — but will it work on the children listening to this story?

When father puts young Henry to bed he always says “Dad, tell me about when I was small.” His father complies, telling Henry how, when he was little, he used to be so tiny that he could take his pet ant out for a walk on a leash! What’s more, he got his hair combed with a toothbrush and was such a little boy that he could even fit in his father’s shirt pocket. Henry was so small that his father’s original name for him, Hieronymous, wouldn’t fit. 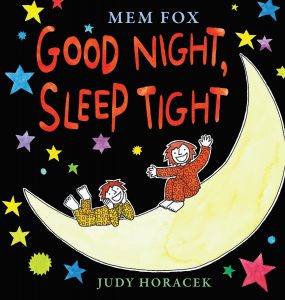 In this book with rhyming text, Bonnie and Ben’s favorite babysitter reads them nursery rhymes before putting them to bed. 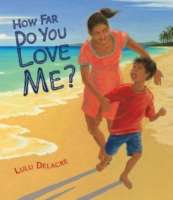 Messages of love between children and adults are framed in the language of the natural world spanning different cultures and all thirteen different locations in seven continents around the world, each a beautifully illustrated scene of adults and children in a place of natural beauty.