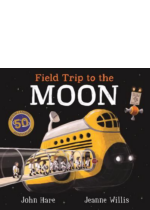 In this wordless picture book, a girl is accidentally left behind on a class trip to the moon. 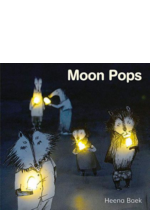 One sweltering summer night, while the many residents of one apartment building are struggling to fall asleep, the moon begins to melt. Granny hears it dripping and runs out to catch the moon drops in a bucket. At first unsure what do with the drops, she is soon inspired to turn them into popsicles—moon pops!—to help cool down her neighbors.
But as everyone drifts off to sleep, a new problem arises. The fabled rabbits who, according to folklore live on the moon, have lost their home! With the last of the moon drops, Granny grows a new moon from the potted plant in her window. As the moon ascends to the starry sky above, the rabbits return to their home, and Granny returns to her bed.

Moar has always loved autumn―playing outside with his friends, feeling the weather get colder―but there is one thing about autumn that really worries Moar. The moon. The days become shorter and the moon, with its creepy face and eerie smile, seems to be looking down on him before he can even get home from school! So, one day, Moar is determined to get home before the moon appears in the sky. But there are so many fun things to do on the way home, he may just run out of time!

For centuries, humankind has gazed up at the Moon in awe and wonder. It has been a source of inspiration to artists, astronomers, poets, and mathematicians alike. But how much do we really know about our closest neighbor? Explore the history of mankind’s relationship with the Moon: the science, the myths, the facts, the fiction, and how it affects our everyday lives and the world around us.

When Fox dreams that the moon is missing, he and his friends go on a quest to find it and return it to the sky.

In anticipation of their maiden voyage, Seraphin and the Knights of Aether had prepared for everything―except treason. The villainous chamberlain wants to overthrow King Ludwig and claim the electro-aetheric technology for Prussia. The only escape for the king and his companions lies in the frosty skies above Bavaria. The aethership’s first flight is a success, but their respite is short-lived. As long as the chamberlain is free to spread his lies, these travelers will find no safe harbor. To save the king’s throne, they must push the ship even farther―out of the sky . . . and into the stars!

A Creature who cannot tolerate sunlight lives in a gray cave, longing for something small to care for, until a sun spark appears and teaches her about the world outside.

On the heels of Lindbergh: The Tale of a Flying Mouse comes Armstrong: A Mouse on the Moon—where dreams are determined only by the size of your imagination and the biggest innovators are the smallest of all.

Chock-full of charm and whimsy, this 1948 title tells a simple, endearing tale of a curious little lad on his search for the moon come daylight. Amos thought he had captured the moon but the next morning it had vanished–so he went searching for it.