In this timeless Aesop’s fable, a fox and a crow vie for a piece of bread. The crow has it, but can the fox get it? This breathtakingly beautiful picture book adapted by Manasi Subramaniam and by Culpeo S. Fox is an exploration of this tale. Each page stands alone like a brilliant painting; when the pages come together, they tell us the story like never before.

From classics like “The Tortoise and the Hare” and “The Grasshopper and the Ants” to obscure gems like “The Frogs Who Desired a King,” Fable Comics has something to offer every reader. Twenty-eight fables from different cultures and traditions are wonderfully adapted and illustrated in comics format by twenty-six different cartoonists. Edited by New York Times bestselling Fairy Tale Comics’ Chris Duffy, this jacketed hardcover is a beautiful gift and an instant classic.

In this version of the blind men and the elephant, based on a poem by Rūmī, Persian villagers try to figure out what strange animal in a dark barn has arrived from India. 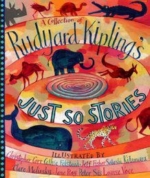 In this gorgeous collection featuring eight of Kipling’s JUST SO STORIES, each tale is illustrated by a different leading contemporary artist.How did the rude Rhinoceros get his baggy skin? How did a ‘satiably curious Elephant change the lives of his kin evermore? First told aloud to his young daughter (“O my Best Beloved”), Rudyard Kipling’s inspired answers to these and other burning questions draw from the fables he heard as a child in India and the folktales he gathered from around the world.

While a farmer tends his field of wheat, six hungry crows watch and wait in a nearby tree. When the wheat ripens, the farmer builds a scarecrow to frighten them off, but these ingenious crows are not so easily scared. An owl helps the farmer and the crows reach a compromise over the rights to the wheat crop.

When Ant spies a carefree Grasshopper playing a fiddle outside on the lawn, Ant immediately harrumphs at the insect’s foolishness and continues to go about his very serious business of gathering and counting his food for the winter. But Ant finds Grasshopper’s music and whimsy more catchy than he’d like, and soon he’s distracted by his own rhyming and doodling! When the harsh winter hits and Ant finds Grasshopper cold and hungry in the snow, he can’t help but bring him inside. Only after opening his home to Grasshopper does Ant realize that music, dancing, and laughter have their place in his life, too. Luli Gray’s funny twist on this fable will have readers giggling and singing. With Giuliano Ferri’s lush and whimsical illustrations, this book is both heartwarming and lovely to behold.

Daniel Pennac’s fable of a boy and a wolf who dare to meet each other’s gaze unfolds with humor, poignancy, and philosophical resonance. They were born worlds apart, the wolf from the Far North and the boy from Yellow Africa. Now all that separates them is a cage at the zoo. The wolf has lost much on his journey, including an eye and his beloved pack. But when he finally consents to trust the strange, still little boy who has been watching him, to meet his eye, their lives intersect with unforgettable results. Master storyteller Daniel Pennac weaves the events of two lives into a mythic tapestry that ultimately and magnificently reveals the fellowship of all creatures. Ten illustrations by Max Grafe enhance this fabulous translation from the French. 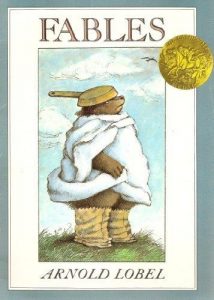 Twenty original fables about an array of animal characters from crocodile to ostrich.

An illustrated retelling in verse of ten fables by Aesop, including “The Laborer and the Nightingale,” “The Frogs Choose a King,” and “The Horse and the Donkey.” 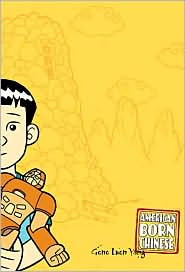 A tour-de-force by rising indy comics star Gene Yang, American Born Chinese tells the story of three apparently unrelated characters: Jin Wang, who moves to a new neighborhood with his family only to discover that he’s the only Chinese-American student at his new school; the powerful Monkey King, subject of one of the oldest and greatest Chinese fables; and Chin-Kee, a personification of the ultimate negative Chinese stereotype, who is ruining his cousin Danny’s life with his yearly visits. Their lives and stories come together with an unexpected twist in this action-packed modern fable. American Born Chinese is an amazing ride, all the way up to the astonishing climax.

Take a closer look at American Born Chinese as examined in WOW Review.