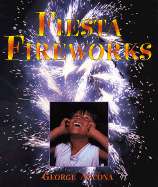 Describes the preparation of fireworks as well as the festival honoring San Juan de Dios, the patron saint of Tultepec, Mexico, which is famous for its master pyrotechnics

There’s always a lot of action in the Mexican American neighborhood where Mr. Lozano lives. Amelia argues with Anita; Benito loves bean burritos but not bumblebees; Hortencia and Herminia hover around like hummingbirds; and Zacarias is catching some Zs on Zachary Street. Jose Lozano’s wacky little stories and illustrations combine Mexican culture with “Sesame Street” smarts to make for a wonderful read-aloud ABC book in Spanish and English. Jose Lozano, who lives in Anaheim, California, makes his living as an elementary school teacher, but his passion is art. He is a rising star in the thriving Latino art scene in Los Angeles. “With this amusing trip through the streets of a Mexican-American neighborhood, readers will discover the lives, adventures, secrets, hobbies and special skills of a most varied gallery of personages. “With the skills of a master storyteller, Lozano creates in each page, in alphabetical order, a lively, one-paragraph portrait using words that start with the same initial letter of his characters’ names: “B is for Benito who loves baseball, bumblebees, and big bean burritos”; “I is for Isabel who likes to stay indoors, cruise the Internet and write interesting stories”; “P is for Pablo who has won many prizes for playing the piano perfectly.” (Los Otros, hermanos Tonio, Lluvia and Chuy, new to the neighborhood, haven’t yet learned English.) “The author’s detailed and vibrant gouache paintings are framed as pictures in an album, reflecting the festive spirit of a real Hispanic community. Crosthwaite’s excellent Spanish rendition maintains the savor and rhyme of the original text and its clever wordplay, making the story enjoyable in both languages. Drawings of alphabet cubes serve as dividers between the texts.”–“Kirkus Reviews” 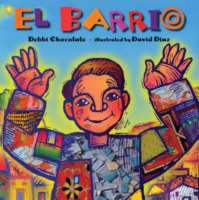 Join a young boy as he explores his vibrant neighborhood. The city shimmers with life—at once a party, a waltz, and a heartbeat. El Barrio is his sister preparing for her quinceañera, his grandfather singing about the past, and his cousins’ stories from other lands. The city is alive with the rhythms of the street. Told in lyrical language and through bold, colorful illustrations, this celebration of Hispanic culture and urban life is sure to fire children’s curiosity about where they live and what they can discover in their own neighborhoods. 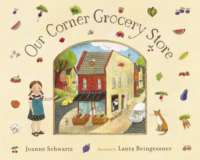 A picture book that celebrates local shops and building communities.Anna Maria takes great pleasure and pride in her grandparents’ corner grocery store. Every Saturday she spends the day helping to arrange fruits and vegetables, greet the customers, and keep things neat and tidy. Through her day we meet the neighbors and learn what an important part the corner grocery store plays in the community. Nonno Domenico, Nonna Rosa, and Anna Maria supply more than goods as the steady stream of customers arrives. Lunches are made, news is shared, bargains are purchased, recipes are traded, and cheerful ciaos are called. By the end of a long day, Anna Maria has a true sense of just how wonderful the sights and smells within the store are and how much they mean to everyone.Charmingly illustrated in great detail, Our Corner Grocery Store pays tribute to the small independent grocers who supply color and atmosphere to city streets. Young readers will particularly enjoy finding and naming the wide array of produce, breads, candies, and dry goods that abound in this friendly establishment.