This love story for the ages, set in a re-imagined industrial Asia, is a little dark, a bit breathless, and completely compelling. Sixteen-year-old Wen assists her father in his medical clinic, housed in a slaughterhouse staffed by the Noor, men hired as cheap factory labor. Wen often hears the whisper of a ghost in the slaughterhouse, a ghost who grants wishes to those who need them most. And after one of the Noor humiliates Wen, the ghost grants an impulsive wish of hers — brutally. Guilt-ridden, Wen befriends the Noor, including the outspoken leader, a young man named Melik. At the same time, she is lured by the mystery of the ghost. As deadly accidents fuel tensions within the factory, Wen is torn between her growing feelings for Melik, who is enraged at the sadistic factory bosses and the prejudice faced by his people at the hand of Wen’s, and her need to appease the ghost, who is determined to protect her against any threat — real or imagined. Will she determine whom to trust before the factory explodes, taking her down with it?

In 1887, the social-climbing Cranstons voyage from New York to London, where they hope to find a husband for their awkward older daughter, secretly accompanied by Helena and her mouse siblings, for whom the journey is both terrifying and wondrous as they meet an array of titled humans despite their best efforts at remaining hidden.

In 1815, Lady Sophie Rosier’s first London season is marred not only by her physical and emotional scars, but also by magical attacks on her father and other members of the British War Cabinet, and while Sophie’s magical powers are unreliable, she and her new best friend Parthenope decide to investigate–despite the distraction of Parthenope’s handsome cousin.

With energy wars flaring across the globe, oil prices gone crazy, regular power cuts, rationing, and soldiers keeping the Outsiders in check, Hunter, one of the privileged of society, is fascinated by the Outsiders, so when he meets Uma he is quickly drawn into her circle of the poor and disenfranchised.

Determined to focus on work rather than books, as his father had, twelve-year-old Patrick Waters leaves Belfast as a steward on the Titanic, but the very wealthy Harry Widener arranges to tutor him, drawing Patrick into association with thieves seeking Harry’s very rare edition of Francis Bacon’s Essays.

Anna and Abel couldn’t be more different. They are both seventeen and in their last year of school, but while Anna lives in a nice old town house and comes from a well-to-do family, Abel, the school drug dealer, lives in a big, prisonlike tower block at the edge of town. Anna is afraid of him until she realizes that he is caring for his six-year-old sister on his own. Fascinated, Anna follows the two and listens as Abel tells little Micha the story of a tiny queen assailed by dark forces. It’s a beautiful fairy tale that Anna comes to see has a basis in reality. Abel is in real danger of losing Micha to their abusive father and to his own inability to make ends meet. Anna gradually falls in love with Abel, but when his “enemies” begin to turn up dead, she fears she has fallen for a murderer. Award-winning author Antonia Michaelis moves in a bold new direction with her latest novel: a dark, haunting, contemporary story that is part mystery, part romance, and part melodrama. 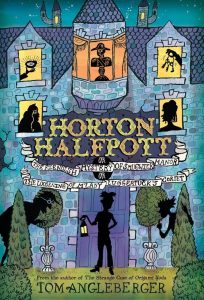 Tom Angleberger’s latest, loopiest middle-grade novel begins when M’Lady Luggertuck loosens her corset (it’s never been loosened before!), thereby setting off a chain of events in which all the strict rules of Smugwick Manor are abandoned. When, as a result of “the Loosening,” the precious family heirloom, the Luggertuck Lump (quite literally a lump), goes missing, the Luggertucks look for someone to blame. Is it Horton Halfpott, the good-natured but lowly kitchen boy who can’t tell a lie? Or one of the many colorful cast members in this silly romp of a mystery.

When her mother wants her to be part of the high society world in their native Puerto Rico, Teresa attends a private school but loses her best friend. All Teresa and her best friend and classmate Ana think about is winning the contest for the Junior Queen and Princess of their town in Ponce, Puerto Rico. But Tere’s mother has different ideas for her only daughter. She wants her to be part of La Sociedad, “high society,” and go to a fancy private school. At first Tere doesn’t want to leave her school friends to follow her mother’s dream. She knows her parents can’t afford the luxuries the rich girls take for granted. But when Tere gets into trouble and has a fight with Ana, she quickly changes her mind. Now she finds herself caught between two worlds.

If someone hurts your sister and you’re any kind of man, you seek revenge.If your brother’s accused of a terrible crime but says he didn’t do it, you defend him.When Mikey’s sister claims a boy assaulted her, his world begins to fall apart. When Ellie’s brother is charged with the offense, her world begins to unravel. When Mikey and Ellie meet, two worlds collide.

Violet Willoughby doesn’t believe in ghosts. But they believe in her. After spending years participating in her mother’s elaborate ruse as a fraudulent medium, Violet is about as skeptical as they come in all matters supernatural. Now that she is being visited by a very persistent ghost, one who suffered a violent death, Violet can no longer ignore her unique ability. She must figure out what this ghost is trying to communicate, and quickly because the killer is still on the loose. Afraid of ruining her chance to escape her mother’s scheming through an advantageous marriage, Violet must keep her ability secret. The only person who can help her is Colin, a friend she’s known since childhood, and whom she has grown to love. He understands the true Violet, but helping her on this path means they might never be together. Can Violet find a way to help this ghost without ruining her own chance at a future free of lies?