The 2000 winner of the Goscinny Prize for outstanding graphic novel script, this is the harrowing tale of the Tutsi genocide in Rwanda, as seen through the eyes of a boy named Deogratias. He is an ordinary teenager, in love with a girl named Bénigne, but Deogratias is a Hutu and Bénigne is a Tutsi who dies in the genocide, and Deogratias himself plays a part in her death. As the story circles around but never depicts the terror and brutality of an entire country descending into violence, we watch Deogratias in his pursuit of Bénigne, and we see his grief and descent into madness following her death, as he comes to believe he is a dog. 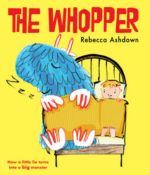 This humorous, quirky story is about a little boy who tells a lie, only to be followed around by his guilt in the form of the Whopper, a hungry and persistent monster. As Percy’s guilt grows, so does the Whopper, until finally the Whopper EATS Percy! Percy at last realizes that he must tell the truth in order to keep the Whopper from growing any bigger.

When she takes money from her neighbor’s wallet in order to buy a kitten, Sophie finds that she cannot live with the guilt.

Life is smoothest for thirteen-year-old Ellie when she keeps her opinions to herself, gets good grades and speaks carefully when her parents ask her to settle their arguments. She feels guilty that she welcomes the chance to spend the summer in another city with her mother’s older sister, Jeanette. Ellie makes a new friend and learns to play an Argentine instrument called the bandoneón, which she finds in her aunt’s basement. When she goes searching for the bandoneón’s original owner, she discovers a story of political intrigue and family secrets that help her start to figure out where her parents end and she begins.

If someone hurts your sister and you’re any kind of man, you seek revenge.If your brother’s accused of a terrible crime but says he didn’t do it, you defend him.When Mikey’s sister claims a boy assaulted her, his world begins to fall apart. When Ellie’s brother is charged with the offense, her world begins to unravel. When Mikey and Ellie meet, two worlds collide.

Two teenagers who are living on the streets and barely getting by become involved in a complicated criminal plot, and make an unexpected connection with each other.