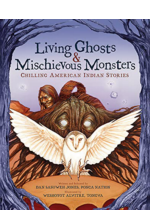 Some of the creatures in these pages might only have a message for you, but some are the stuff of nightmares. These thirty-two short stories — from tales passed down for generations to accounts that could have happened yesterday — are collected from the thriving tradition of ghost stories from American Indian cultures across North America. Prepare for stories of witches and walking dolls, hungry skeletons, La Llorona and Deer Woman, and other supernatural beings ready to chill you to the bone.

War between the devas and the demons is imminent, and the Otherworld is on high alert. Fourteen-year-old Aru Shah and her friends are sent on a mission to rescue two “targets,” one of whom is about to utter a prophecy that could mean the difference between victory and defeat. Turns out the targets, a pair of twins, are the newest Pandava sisters, though the prophecy says that one sister is not true. When the Pandavas fail to prevent the prophecy from reaching the Sleeper’s ears, the heavenly attendants ask them to step aside. Aru believes that the only way to put the shine back on their brand is to find the Kalpavriksha, the wish-granting tree that came out of the Ocean of Milk when it was churned. If she can reach it before the Sleeper, perhaps she can turn everything around with one wish.

They killed my mother. They took our magic. They tried to bury us. Now we rise. Zélie Adebola remembers when the soil of Orïsha hummed with magic. Burners ignited flames, Tiders beckoned waves, and Zélie’s Reaper mother summoned forth souls. But everything changed the night magic disappeared. Under the orders of a ruthless king, maji were killed, leaving Zélie without a mother and her people without hope. Now Zélie has one chance to bring back magic and strike against the monarchy. With the help of a rogue princess, Zélie must outwit and outrun the crown prince, who is hell-bent on eradicating magic for good. Danger lurks in Orïsha, where snow leoponaires prowl and vengeful spirits wait in the waters. Yet the greatest danger may be Zélie herself as she struggles to control her powers and her growing feelings for an enemy.

Children of Blood and Bone is the WOW Recommends: Book of the Month for August 2018 and is reviewed in Volume 11, Issue 3 of WOW Review: Reading Across Cultures.

For nearly a century, the Nomeolvides women have tended the grounds of La Pradera, hiding a terrible legacy, until mysterious Fel arrives and Estrella helps him explore his dangerous past.

In addition to the ordinary problems of a Puerto Rican teenager in Brooklyn, Sierra Santiago is working on developing her shadowshaping skills, and she is beginning to think she may need all the skill she can summon because it seems that when she channeled hundreds of spirits through herself in order to defeat Wick she woke up something very powerful and very unfriendly and put her family and friends at risk.

Having arrived in Candeia, Brazil, starving and footsore, after walking sixteen days to fulfill his dying mother’s last wishes, young Samuel takes up residence in an enormous, broken statue of Saint Anthony and finds that he can hear the prayers of the townspeople, despite his lack of faith.

When twelve-year-old Prince Lev Lvov goes to live with his aunt at Falcon House, he takes his rightful place as heir to the Lvov family estate. Prince Lev dreams of becoming a hero of Russia like his great ancestors.