Fifteen-year-old Muzna Saleem is passionate about writing and dreams of becoming a novelist. There’s just one problem – her super-controlling parents have already planned her life out for her.

When Louise Wolfe’s boyfriend mocks and disrespects Native people in front of her, she breaks things off and dumps him over e-mail. She’d rather spend her senior year with her family and friends and working on the school newspaper. The editors pair her up with Joey Kairouz, an ambitious new photojournalist, and in no time the paper’s staff find themselves with a major story to cover: the school musical director’s inclusive approach to casting The Wizard of Oz has been provoking backlash in their mostly white, middle-class Kansas town. As tensions mount at school, so does a romance between Lou and Joey. But ‘dating while Native’ can be difficult. In trying to protect her own heart, will Lou break Joey’s? — adapted from jacket.

People say someone was as fierce as a wolf, as timid as a rabbit, asa sly as a fox or as wise as an owl. But not all wolves are fierce, any more than all foxes are sly or all owls wise. A gentled wolf returns to the forest of his birth to practice medicine, but a silly owl warns sick animals to stay away.

Orion is scared of a lot of things, but most of all he’s scared of the dark. So one night the Dark decides to take Orion on an adventure. 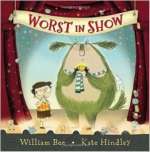 It’s time for The Best Pet Monster in the World Competition and Albert can’t wait to enter his very own monster, Sidney. But is sweet, well-behaved Sidney really the smelliest, dirtiest, most parasite-ridden monster of all?

A magical story of friendship to power the imagination and encourage children (and bears!) towards a lifelong love of reading.

Long ago ants only cared about two things—fashion and dancing—and stylish shoes, the link between the two, became their biggest obsession. When the ants’ only cobbler leaves town, the ants find themselves in trouble. How are stylish ants supposed to keep in vogue without new shoes? When one ant finally does the shocking thing: shows up to a dance BAREFOOT, she creates a scandal…and eventually a new fashion trend. A witty tale of change, gracefully matched with chic art depicting high-fashion in ant-sized form.

It is late 1903, and Rachel and her family are leaving Russia to escape the murderous riots against Jews. They travel cross country on the Trans-Siberian Railway to the coast and board a ship for Shanghai. China offers refuge, but life for them there is difficult and strange. Rachel is determined to ensure her family’s survival, but does not want to give up her dreams for her future. The opportunity to write for a Jewish newspaper in Shanghai may be the solution she’s been hoping for. The story that began in the novel Rachel’s Secret continues in Rachel’s Promise and Rachel’s Hope.

Join the discussion of Rachel’s Promise as well as other books centered around relocation on our My Take/Your Take page.