At the start of World War II, there were about 1.6 million Jewish children living in Europe. Fewer than one in 10 of those children survived German leader Adolf Hitlers reign of terror. More than 100,000 Jewish children did survive, however through a combination of strength, cleverness, the help of others, and, more often than not, simple good luck. Children of the Holocaust tells the stories of these young people.

“The Luxe” meets the ancient world in the extraordinary story of Cleopatra’s daughter. Selene has grown up in a palace on the Nile with her parents, Cleopatra and Mark Antony–the most brilliant, powerful rulers on earth. But the jealous Roman Emperor Octavianus wants Egypt for himself. When war finally comes, Selene faces the loss of all she’s ever loved. Forced to build a new life in Octavianus’s household in Rome, she finds herself torn between two young men and two possible destinies–until she reaches out to claim her own.

When young English woman Grace Darling spots a wreck offshore, she enlists the aid of her father to rescue the survivors–an act that brings her the adoration and rejection of her nation. By the author of A Chance Child.

As twins Rachel and Adam are pursued across Europe by terrifying forces, they realize they can trust no one — and must draw on their special powers to survive. After the shocking revelations in Triskellion, being guests of the “Hope Project” might seem like a relief. But Rachel and Adam soon figure out that they’re being held prisoner, and that the program has more sinister goals than archaeological research in mind. A hideous discovery at the funeral of their grandmother makes it clear that the teenagers must flee from England to Paris, Seville, and finally Morocco, evading not only their former benefactors but also the followers of “The Englishman,” a zombie-like figure with a frightening agenda of his own. It will take all of their special abilities and courage to stay alive until their journey reaches an explosive climax — and they unearth, on the North African coast, an ancient secret even more startling than the first.

Two brothers, Peter and William Moeller save the rapidly diminishing herds of elephants and other wildlife living in the Queen Elizabeth National Park in Uganda.

After the German occupation of the Netherlands, Benjamin leaves the Christian family with whom he had been living and reunites with his real parents who returned from hiding.

Avramik, a young Holocaust survivor, has difficulties adjusting to life on a kibbutz in the days before the first Arab-Israeli War. 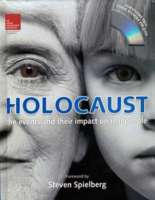 When a baby and a kitten are found safe and dry after a disastrous flood in 1421, the people of a village in southern Holland decide to rebuild.