After lunch the Yang warriors prepare for battle. They practice drills, balance rocks on their heads, wield magical swords from fallen branches. Led by ten-year-old Master Me (whose name means “little”), the ten cousins are ready to defend the family at all costs. After a week without fresh vegetables , the warriors embark on a dangerous mission to look for food, leaving the camp’s boundaries, knowing their punishment would be severe if they were caught by the guards.

Hector has always minded his own business, working hard to make his way to a better life someday. He’s the chess team champion, helps the family with his job at the grocery, and teaches his little sister to shoot hoops overhand.
Until Joey singles him out. Joey, whose older brother, Chavo, is head of the Discípulos gang, tells Hector that he’s going to kill him: maybe not today, or tomorrow, but someday. And Hector, frozen with fear, does nothing. From that day forward, Hector’s death is hanging over his head every time he leaves the house. He tries to fade into the shadows — to drop off Joey’s radar — to become no one.
But when a fight between Chavo and Hector’s brother Fili escalates, Hector is left with no choice but to take a stand.
The violent confrontation will take Hector places he never expected, including a reform school where he has to live side-by-side with his enemy, Joey. It’s up to Hector to choose whether he’s going to lose himself to revenge or get back to the hard work of living.

Inspired by award-winning Inuk director Zacharias Kunuk’s short film of the same name, The Shaman’s Apprentice tells the story of a young shaman in training who must face her first test―a trip to the underground to visit Kannaaluk, The One Below, who holds the answers to why a community member has become ill. Facing dark spirits and physical challenges, the young shaman must learn to stifle her fear and listen to what Kannaaluk has to tell her. 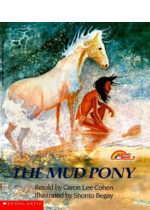 A poor boy becomes a powerful leader when Mother Earth turns his mud pony into a real one, but after the pony turns back to mud, he must find his own strength.

“Usha lives in a town where the sun hasn’t shone for as long as anyone can remember. Only her grandfather remembers its brilliance, and tells Usha stories about the time before other people took the sun away, building a wall to keep it all to themselves. So Usha decides to do something, and sets off in search of the sun. When at last Usha reaches the wall, she tries to kick it down, climb it, yell her way through it-but the bricks don’t budge. It’s only after hearing voices on the other side of the wall that Usha changes her plan. She sings, shares her grandfather’s stories, and piques the curiosity of the people on the other side until they are inspired to remove the bricks, one by one. Together, they bring the wall down. Inspired by the idea of peaceful protest, this book offers a timely message of cooperation and empathy”–

“On the day that you were born, Kokolimalayas, the Bone Man, drank the river dry and devoured all the people except you and me. When you are old enough to be a warrior, you will bring the waters back and people will live here once again”.Ever since he was a young boy, Nulwee has been told the frightening story of the Bone Man by his Grandmother. She has always warned him that if he was to wake the enormous skeletal creature, that he would then have to defeat him in battle to save their village. Nulwee lives in dread of that moment. How will a small boy be able to destroy the fearless Bone Man?

This novel for middle readers takes place in a Japanese internment camp in China in WWII, where thirteen-year-old Gwen follows the Girl Guide code in order to survive.

Growing up in a lighthouse, 11-year-old Pet’s world has been one of storms, secret tunnels, and stories about sea monsters. But now the country is at war and the clifftops are a terrifying battleground. Pet will need to muster all her bravery to uncover why her family is being torn apart. This is the story of a girl who is afraid and unnoticed. A girl who freezes with fear at the enemy planes ripping through the skies overheard. A girl who is somehow destined to become part of the strange, ancient legend of the Daughters of Stone.

A little boy offers advice to his cat, which is lost in the city, from taking shortcuts through safe alleys to finding a friend in the park.