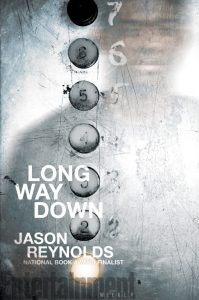 NO. 3: REVENGE
If someone you love
gets killed,
find the person
who killed
them and
kill them (p. 33).

Will’s brother Shawn is dead and 15-year-old Will wants revenge. That is all he can think about as he grabs his brother’s gun in their apartment, sneaks past his grieving mother who is sleeping at the kitchen table and walks out the front door. He’s sure he knows the person who opened fire outside of their apartment building, killing Shawn. Will has never held a gun but gets on the elevator and travels from the seventh floor to follow the rules passed down through the generations–don’t cry, don’t snitch, get revenge. Will wrestles with his sanity as the elevator stops at every floor and someone else gets on, including a teenage girl, Buck, and Shawn, all of whom have died. The sixty-second ride to the lobby floor is all the time Will has to decide if he will follow the rules…or break them.

Written as a series of short, free verse poems, Long Way Down examines the life of one boy’s struggle to decide what to do about his brother’s death. Although Will doesn’t want to believe his brother was shot, he is not surprised because these events happen in his neighborhood; that’s just the way things are. Will must decide for himself if he will do what he was taught to do and follow the rules, or break with tradition and follow a different path, which could mean justice going unserved and never getting revenge on the person who killed his brother.

Throughout the story, readers gain insight into the widespread nature of gun violence in some neighborhoods. Readers are also challenged to consider the vicious cycles of hate and violence caused by blindly following rules without knowing the why behind actions in order to break these cycles and take steps towards finding solutions to gun violence and wide-spread retaliation.

Long Way Down is an excellent text for a social injustice inquiry unit in middle or high school classrooms. Titles with a similar theme include The Hate You Give by Angie Thomas (2017), The 57 Bus: A True Story of Two Teenagers and the Crime That Changed Their Lives by Dashka Slater (2017), Dry by Neal Shusterman and Jarrod Shusterman (2018), and The Absolutely True Diary of a Part-Time Indian by Sherman Alexie (2009).

Jason Reynolds was raised in Oxon Hill, Maryland, and currently resides in Brooklyn, New York. He wrote the New York Times best seller, Long Way Down after spending time in U.S. juvenile detention centers where thousands of 14-year-old boys serve 10-year sentences for gang violence. While visiting these centers, he learned about the crimes committed by the young men even though most had no idea from where the issue stemmed, with one gang rivalry dating back to the 1960s over a pair of shoes. He is the co-author of another New York Times best selling novel, All American Boys (2015), and has won several national book awards for young people’s literature.