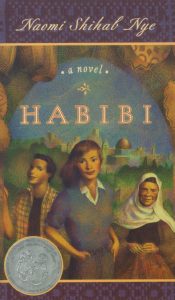 Liyana’s world is turned upside down when her father announces that he is taking their family from their home in St. Louis, Missouri to his homeland of Palestine. Although Liyana is a smart, thoughtful fourteen-year-old, she struggles to cope with the many changes her family endures as they move and try to start a new life in a country vastly different than the one she has previously known. She learns how to thrive in a local Armenian school even though she is an outsider. She tries to master Arabic while getting to know her many relations, particularly her grandmother Sitti. She and her family face cruelty and injustice at the hands of Israeli soldiers, yet she falls in love with a Jewish boy and eventually introduces him to her family. These events shape Liyana into a young woman who is proud of her cultural heritage and who longs to see peace in the midst of unchanging animosity.

This story is engaging and the writing is bright, descriptive, and beautiful. At the same time, Habibi wrestles with a relevant, important, and controversial topic. The way that Liyana must navigate life in the midst of the Israeli-Palestinian conflict while dealing with her own coming-of-age problems and adjustment issues is powerful. In addition, the way her character attempts to tackle the racial and cultural divide head on is a great mirror for students who are perhaps afraid of speaking out for social change. They can hopefully see Liyana’s strength and realize that they have agency to affect change.

Habibi would be an excellent book to use in exploring the Israeli-Palestinian conflict. In order to add Israeli perspectives, Habibi could be paired with Tali’s Jerusalem Scrapbook by Sylvia Rouss (2003) or If You Could Be My Friend: Letters of Mervet Akram Sha’Ban and Galit Fink by Litsa Boudalika (1998). The movie Israel and Palestine: A Divided Land by Knowledge Unlimited (2004) or the book Israel and Palestine by Paul Mason (2009) also provide more context to the current conflict.

Naomi Shihab Nye was born in St. Louis, Missouri, to a Palestinian father and American mother and spent some of her adolescence in Palestine. She wrote Habibi based on many of her personal experiences. Nye currently lives and works in San Antonio, Texas. She has received numerous awards and honors for her poetry, short stories, and novels. Her other novels include The Turtle of Oman (2016) and Going, Going (2005). To learn more about Nye visit her website at https://www.poets.org/poetsorg/poet/naomi-shihab-nye and https://www.poetryfoundation.org/poets/naomi-shihab-nye