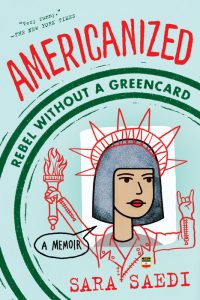 Sara Saedi writes a memoir about her status as an undocumented Iranian immigrant and her family’s long and arduous journey to achieving citizenship. Growing up in the U.S. since the age of two, Sara doesn’t find out about her undocumented status until she is in her teens. When she does, her status becomes a central concern and characteristic of her identity. The story seems like a rudimentary account of a normal teen’s life–dealing with acne, school, boys, drinking, family–but it is all tainted by the deep secret she harbors. Desperate for a green card but stalled in the legal system, Sara constantly worries about the threat of deportation while navigating her changing body, relationships, and environment.

Americanized is a cornucopia of various forms of information and media. The book starts off with a note from the author where she explains that her book is meant to be humorous, but that being undocumented is anything but a joke. Then, she dives into the moment when she finds out about her own undocumented status. When her frustrated sister laments her inability to get a part-time job because she doesn’t have a social security number, Sara realizes that she doesn’t have one either. The rest of the book is laid out in fifteen chapters that chronicle the history of her parents, relationships with her siblings, and teen exploits, all enshrouded in a continuous legal labor of trying to get green cards. Chapters are accented with excerpts from her diary, family photos, analogous charts, and footnotes that explain her use of historical references, Iranian words, or general reflections. Every two chapters, Sara includes “Frequently Asked Questions” where she addresses stereotypes or misunderstandings about Iranians. Finally, the book wraps up in an Epilogue, where Sara pens a letter to her alternate self – the girl who grew up in Iran instead of the U.S. As an added bonus, the book includes an “Undocumented Immigrant Refresher Course” where Sara summarizes immigration policies, highlights pertinent vocabulary, and talks about legal rights. Finally, questions for discussion as well as an interview with the author are available at the end.

Saedi masterfully depicts the delicate balance between being an American teenager and an undocumented immigrant. Although Sara grows up in the U.S. and seems to have similar problems to other teens, the pervasive anxiety of being undocumented never lets her forget how different she actually is. The diary excerpts and family photos throughout the book give an authenticity to the author’s story. In addition, her conversational, light tone makes it seem like she is conversing with a close friend. Sara shares the happy stories along with the more embarrassing and tragic ones, and doesn’t mince words when expressing how much her undocumented status affected her life. At the same time, her appeal to pop culture and memes will intrigue young readers and help them empathize with her as a person.

Saedi also highlights her family’s particular version of being Iranian, but that part of her life seems overshadowed by her American experience and how being undocumented creates a barrier for her. Still, this isn’t a book meant to highlight her race and culture, it is a book aimed at shining a light on the undocumented immigrant experience. Even in her dedication Saedi addressed “all the dreamers” along with her siblings. Saedi captures how devastating and painful the process of legalization can be.

This book can be paired with The Unwanted: Stories of the Syrian Refugees by Don Brown (2018) for a visual look at the struggles of immigrants today; with Persepolis by Marjane Satrapi (2000) for an in-depth look at the Iranian Revolution; with Darius the Great is Not Okay by Adib Khorram (2018) for a fictionalized, but realistic look at fitting in with dual cultures; or with Denied, Detained, Deported: Stories from the Dark Side of American Immigration by Ann Bausum (2009) for a historical parallel to today’s immigration policies. By providing stories of various voices and experiences with immigration and assimilation, teen readers can become more knowledgeable about the reasons people immigrate, the effects of assimilation on the individual, and the way policies help or hinder those in need. Sara Saedi currently lives in Los Angeles, California with her family. Visit her website (http://sarasaediwriter.com/) for more information.