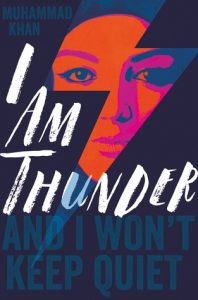 Muzna Saleem feels like her life is ruled by the expectations of her parents and community. As the only daughter of Pakistani immigrants to England, she is expected to give up her dream of becoming a writer to become the doctor her parents want. While her family is Muslim, they do not regularly pray or attend mosque. However, they have very conservative views about makeup, dress, and boys. Muzna survives with the help of her best friend, who encourages both her writing and her silliness.

When her friend violates an important community standard, Muzna’s parents demand that she not have any contact with her. The family moves to a new neighborhood and Muzna begins attending a new school. At the new school, Muzna’s writing and confidence soar as she and her classmates (from a multitude of ethnic and religious backgrounds) engage in important and very real conversations about what it means to be British and the cohesion of society. The complexities of these conversations, including the teens’ frequent violations of civil dialogue, are one of the strongest parts of this book. As some students work to engage intellectually in the challenging conversations, others revert to name calling and stereotyping. Mr. Dunthrope, their teacher, helps them navigate the conversations with acceptance and understanding.

Muzna becomes friends with several other Muslim students, including a young man, Arif. After going with Arif and his older brother, Jameel, to a talk about how the world is destroying Islam, Muzna becomes more thoughtful about her and her parents’ religiosity, choosing to wear the hijab and attending more and more talks with Jameel and Arif, seeing different ways of understanding her religion. As much as she loves Arif, his brother’s interpretation of Islam and an errand he has her run for him begin to make her suspicious. Muzna sees how Jameel’s beliefs have radicalized his brother and others, and she takes that information to the police. The intense ending shows the reader just how dangerous extreme religious radicalization can be. Muzna discovers that her own views and beliefs are what matter most to her future, and she is able to bring that future to her present while holding on to her new friend.

While it does not focus on the historical reasons for society’s current dynamics, this novel would help high school readers deeply consider modern issues like radicalization and terrorism. Khan’s novel is well-crafted, realistic, and engaging and a welcome addition to a classroom or library. Other books that would complement this text include The Lines We Cross by Randa Abdel- Fattah (2017) and I Am Malala by Malala Yousafzai (2013).

The author, Muhammad Khan, was born in Britain to Pakistani parents, making his portrayal of Muzna’s conflict between her different cultural worlds even more vivid. In the author’s note, Khan said that this book was his attempt to understand how religious extremism is spread. His book focuses on other important current issues, like wearing the hijab, religious terrorism, and radicalization in ways that both feel real for the characters and eye-opening to the reader.

WOW Review, Volume XII, Issue 1 by Worlds of Words is licensed under a Creative Commons Attribution-NonCommercial-ShareAlike 4.0 International License. Based on work at https://wowlit.org/on-line-publications/review/xii-1/