Ely S. Parker (1828–1895) is one of the most unique but little-known figures in US history. A member of the Seneca (Iroquois) Nation, Parker was an attorney, engineer, and tribal diplomat. Raised on a reservation but schooled at a Catholic institution, he learned English at a young age and became an interpreter for his people. During the American Civil War, he was commissioned as a lieutenant colonel and was the primary draftsman of the terms of the Confederate surrender at Appomattox. He eventually became President Grant’s Commissioner of Indian Affairs, the first Native American to hold that post. Award-winning children’s book author and Native American scholar Joseph Bruchac provides an expertly researched, intimate look at a man who achieved great success in two worlds yet was caught between them. Includes archival photos, maps, endnotes, bibliography, and timeline.

A novel based on the life of Ricky Richard Anywar, who at age fourteen was forced to fight as a soldier in the guerrilla army of notorious Ugandan warlord Joseph Kony.

Amina lives on the edges of Mogadishu. Her family’s house has been damaged in Somalia’s long civil war, but they continue to live there, reluctant to leave their home. Amina’s world is shattered when government forces come to arrest her father because his art has been officially censored, deemed too political. Then rebel forces kidnap Amina’s brother, forcing him to become a soldier in Somalia’s brutal ongoing war. Although her mother and grandmother are still with her, Amina feels vulnerable and abandoned. Secretly, she begins to create her own artwork in the streets and the derelict buildings to give herself a sense of hope and to let out the burden of her heart.

“A time wave has altered the entire history of the Civil War. Abraham Lincoln followed Liam into the present from 1831 and now the world is in a dangerous state of limbo. If the TimeRiders can’t return Lincoln to the past, the Civil War will never end.”– 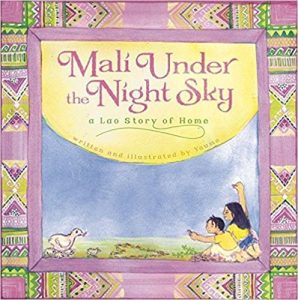 Mali Under the Night Sky is the true story of Laotian American artist Malichansouk Kouanchao, whose family was forced by civil war to flee Laos when she was five. Before the war began, Mali lived an idyllic life in a community where she felt safe and was much loved. But the coming war caused her family to flee to another country and a life that was less than ideal.

Combining simple, economical prose with a profound awareness of the hardships that life sometimes brings to young people, Linda Sue Park has crafted a suspenseful, accessible novel that goes beyond newspaper headlines to illuminate human experience. Includes an afterword from the author and one from Salva Dut. A Long Walk to Water begins as two stories, told in alternating sections, about a girl in Sudan in 2008 and a boy in Sudan in 1985. The girl, Nya, is fetching water from a pond that is two hours’ walk from her home: she makes two trips to the pond every day. The boy, Salva, becomes one of the “lost boys” of Sudan, refugees who cover the African continent on foot as they search for their families and for a safe place to stay. Enduring every hardship from loneliness to attack by armed rebels to contact with killer lions and crocodiles, Salva is a survivor, and his story goes on to intersect with Nya’s in an astonishing and moving way.

Through nine intimate first-person narratives, Out of War tells the story of the Children’s Movement for Peace, a network of organizations struggling against the forty-year civil war in Colombia. Readers will meet young people like Juan Elias, who decided he could best avenge his father’s murder by fighting to end the war; Maritza, who found refuge in the peace movement after her family and friends abandoned her in the communas of Medellin; and Beto, who works for the peace he never had in his abusive home. The voices of these children are raw and real, and their stories are nothing short of inspirational. In 1996, the Children’s Movement for Peace helped organize the Children’s Mandate, a referendum on children’s rights in Colombia. Two million children turned out to vote for their right to peace, sending the Colombian government a powerful message about its inability to control the violence within its borders. Since then, the Movement has worked to help children cope with loss, displacement, poverty, and other effects of the war. It has also taught children how to resolve conflict without fighting. The movement’s work is impressive, yet Out of War is really about the individual children who lead the group. Through them, readers will learn not only about the tenuous life of children in Colombia, but about what it means to give back to your community and face adversity with true courage and hope.