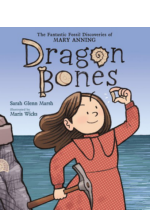 At home in her seaside town in England, little Mary Anning stared out her window. Unlike other children, Mary couldn’t wait for a rainy day. Because when it rained… the bones were revealed. With her father and brother, Mary would go out searching the damp soil after a storm, with the hopes of finding something nobody had seen before: a dinosaur. After her father dies, Mary must continue her search, picking up his tools and venturing out alone. In her life, she discovered several creatures, but was never given credit…until recently. 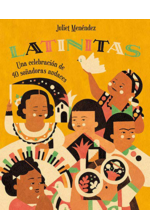 One day, a girl gets on her motorcycle and rides away. She wants to wander the world. To go . . . Elsewhere. This is the true story of the first woman to ride a motorcycle around the world alone. Each place has something to teach her. Each place is beautiful. And despite many flat tires and falls, she learns to always get back up and keep riding.

“A graphic novel biography of Charlotte Bronte, following her and her siblings from childhood to the publication of Jane Eyre”–

In 25 distinct styles from some of the most exciting comic artists, Noisemakers makes for great Women’s History Month reading and is perfect for everyone who is not afraid to use their voice and for those who could use a little boos

An enlightening biography for young adults of a little-known female activist in the Hispanic Civil Rights Movement On December 9, 1969, change was in the air. The small town of Crystal City, Texas would never be the same. After weeks of petitioning for a hearing with the Crystal City school board, students of Crystal City High and their parents descended on the superintendent’s office. The students had been threatened with suspension and even physical violence. Powerful members of the community had insisted they would fire the parents of students if they went in front of the school board, and still, they came. Finally, the school board removed the chairs in the gallery, and the parents and students stood until members of the school board fled to avoid the confrontation. As the students and their parents stood in front of the building, a cry rose from the crowd. “Walk out. Walk out.” So began the Crystal City High student walk out. At the center of the fervor was Severita Lara. Called la cabezuda, or stubborn girl, by her mother, Lara bore the mark of a leader from an early age. She was not afraid to stand up to anyone: girls or boys, teachers or superintendents. She always followed her father’s advice, “If you know it’s right, do it.” José Angel Gutiérrez, the famous civil rights leader, chronicle’s Lara’s ascent from a willful child to the mayor of Crystal City. From her father’s doting support to her mother’s steel-rod discipline, Gutiérrez offers a detailed portrait of the early family life of the woman whose continuing struggle against segregation and discrimination began while she was still a high school student in Crystal City. He also follows her attempts as a single mother to achieve her dream of being a doctor and providing for her sons. This is the story of la cabezuda, Severita Lara, who has made an indelible imprint on American history.

Presents an illustrated biography of the Jewish heroine, Luba Tryszynska, who saved the lives of more than fifty Jewish children in the Bergen-Belsen concentration camp during the winter of 1944/45.