This picture book, first published in Brazil, offers kids a unique look into the lives of children who live along Brazil’s beautiful Tapajós River. 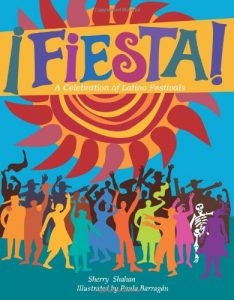 Describes a festival or holiday celebrated in Latin America for each month of the year, from the feast of Saint Anthony in January through Mexico’s Cinco de Mayo, an Inca festival in Peru in June, and a ritual of African origin in Brazil in September.

Martin and his friends are helping their parents turn an old Brazilian coffee plantation into an inn. The children have a fun time helping to renovate the old place and they sleep in a shed that is being converted into a guest room. But one night they hear the sound of a young girl crying. Gradually, the ghost of a slave girl from the late 1800s named Rosario appears to them. Rosario tells them the story of her life and in doing so reveals the danger and instability that existed in Brazil after slavery ended. Though not the best at writing, Martin promises Rosario to record her story in the form of a book. Though the experience of slavery seems remote to Martin and his friends, by the time they\’ve heard Rosario\’s story, the evil of slavery is made painfully clear. Ana Maria Machado’s deft storytelling skills and social conscience come together in this powerfully moving book that explores the history and impact of slavery.