AN INTREPID VOYAGE. A GROUNDBREAKING THEORY. The life and work of oneof the world’s most influential scientists.Young readers of this altogether fascinating biography follow Charles Darwin not only on his journey aboard the HMS Beagle but also through the thinking that led him to his world-changing theory and most famous work, The Origin of th e Species. Complete with historical photographs and documented passages straight from Darwin’s personal diary, this engaging book ensures that a new generation of young readers will get to know one of the scientists who shaped our understanding of the world.

Charles Darwin published The Origin of Species, his revolutionary tract on evolution and the fundamental ideas involved, in 1859. Nearly 150 years later, the theory of evolution continues to create tension between the scientific and religious communities. Challenges about teaching the theory of evolution in schools occur annually all over the country. This same debate raged within Darwin himself, and played an important part in his marriage: his wife, Emma, was quite religious, and her faith gave Charles a lot to think about as he worked on a theory that continues to spark intense debates.Deborah Heiligman’s new biography of Charles Darwin is a thought-provoking account of the man behind evolutionary theory: how his personal life affected his work and vice versa. The end result is an engaging exploration of history, science, and religion for young readers.

They’re weird. They’re unusual. They have four horns and shaggy red fur. And they haven’t changed in hundreds, even thousands of years! They’re the originals–animals that, unlike their barnyard relatives, never evolved from their primitive states. Come meet the four-horned Hebridean sheep, brought to Scotland by Viking raiders, the tiny Exmoor ponies that roam the fog-filled moors of England, and the rest of these modern ancients. Jane Yolen’s childlike story poems and Ted Lewin’s light-infused water-color illustrations capture all the mystique of these remarkable animals.

This playful science book introduces the biology of human evolution and behavior with an accessible, interactive text packed with information and wry, bright computer graphics on each spread.

The vibrant and fun illustrations of Lila Prap make this nonfiction picture book about Dinosaurs irresistible.

This book illustrates the evolution of an imaginary European city from the Stone Age to the distant future.

When was the Earth created and how? And the most pressing question of all — how did humans come to be? What Came First? is a funny but scientifically sound introduction to evolution. Learn about the Big Bang, where it all started, and read vivid descriptions of a melting pot full of microscopic organisms — the very beginnings of life — to the first oceanic life forms and, with the formation of the continents, the first land mammals, all the way through to the evolution of the plant, animal, and human life that surrounds us today.

Meet the Word Snoop. She’s dashing and daring and witty as can be—and no one knows more about the evolution of the English language than she does. Luckily, she’s spilling her secrets in this gem of a book. From the first alphabet in 4000 BC, to anagrams, palindromes, and modern-day text messages, readers will learn all about the fascinating twists and turns our fair language has taken to become what it is today. With playful black-and-white illustrations, riddles to solve, and codes to break, The Word Snoop is definitive proof that words can spark the imagination and are anything but dull. This is a book for every aspiring writer, and every true reader.ima

A look at evolution on the African savannah describes how the acacia bush, in danger of having its leaves ravaged by animals, began to produce thorns that protect it and create a beautiful sound when the wind blows. 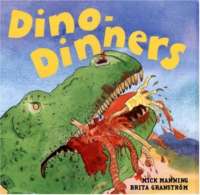 Dinosaurs had huge appetites. But what did they eat? Some grated plants into mush with their powerful jaws. Others swallowed fish whole. And some prowled the land, hunting other dinosaurs for dinner-including their own kind! Young dinosaur fans will find out exactly what-or who-was on the prehistoric menu, as well as interesting facts about each dino’s life, size and shape, and eating habits. This book was created in association with the Natural History Museum in London, England.