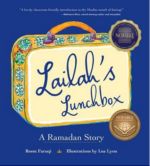 Now that she is ten, Lailah is delighted that she can fast during the month of Ramadan like her family and her friends in Abu Dhabi, but finding a way to explain to her teacher and classmates in Atlanta is a challenge until she gets some good advice from the librarian, Mrs. Scrabble.

Adolf Hitler’s Nazi party is gaining strength and becoming more menacing every day. Dietrich Bonhoeffer, a pastor upset by the complacency of the German church toward the suffering around it, forms a breakaway church to speak out against the established political and religious authorities. When the Nazis outlaw the church, he escapes as a fugitive. Struggling to reconcile his faith and the teachings of the Bible with the Nazi Party’s evil agenda, Bonhoeffer decides that Hitler must be stopped by any means possible!

Hats of Faith is a simple and striking introduction to the shared custom of religious head coverings. With bright images and a carefully researched interfaith text, this thoughtful book inspires understanding and celebrates our culturally diverse modern world.

Charles Darwin published The Origin of Species, his revolutionary tract on evolution and the fundamental ideas involved, in 1859. Nearly 150 years later, the theory of evolution continues to create tension between the scientific and religious communities. Challenges about teaching the theory of evolution in schools occur annually all over the country. This same debate raged within Darwin himself, and played an important part in his marriage: his wife, Emma, was quite religious, and her faith gave Charles a lot to think about as he worked on a theory that continues to spark intense debates.Deborah Heiligman’s new biography of Charles Darwin is a thought-provoking account of the man behind evolutionary theory: how his personal life affected his work and vice versa. The end result is an engaging exploration of history, science, and religion for young readers.

A lyrical celebration of multiculturalism as a parent shares with a child the value of their heritage and why it should be a source of pride, even when others disagree.

Touching on folklore from around the world, famed literary immortals, and studies of animals that seem unaffected by aging, the book delves into topics as diverse as genetics, religious rituals surrounding the afterlife, and research into basic lifestyle choices, like eating blueberries or getting a pet, that could help you live longer. Each page is a playful mix of fascinating facts that open up cross-curricular topics in history, science, and social studies to explore. 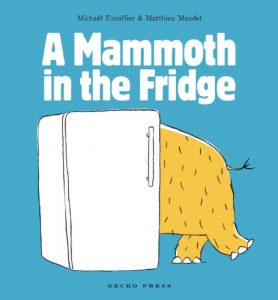 Noah discovers a mammoth in the fridge. At first, his father doesn’t believe him but the evidence is too strong. It’s sitting in the fridge! They call the fire department, but the mammoth slips past their net and hides in a tree. But where did the mammoth come from? Only Noah’s little sister knows the true answer.

Tells the story of the lives of Saints Benedict and Scholastica.

Experience the wonder of the very first Christmas with this magical changing-picture book. The classic Christmas nativity story is stunningly illustrated by evocative pastel artwork depicting angels, shepherds, and wise men arriving in Bethlehem to share the magic of the birth of Jesus. Lift the gatefold flaps to change the pictures and watch the story unfold along the way.

When twelve-year-old Nicola leaves Troupe Brufort and serves as the fool for Mary, Queen of Scots, she experiences the political and religious upheavals in both France and Scotland.