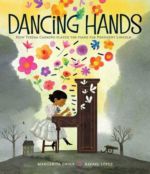 What do you do when a piano shows up in your yard? Take a cat-nap? Use it as a coffee table? What’s a band to do when one of its instruments goes missing? And what does a yellow sock have to do with anything? Join Filippa and friends in a whacky adventure when they wake up to find a piano in the front yard.

“Look after each other and get home safe. And when you do, tell everyone what you saw and what they did to us.” These are Hanna’s father’s parting words to her and her sister when their family is separated at the gates of the Auschwitz-Birkenau concentration camp. Her father’s words–and a black C-sharp piano key hidden away in the folds of her dress–are all that she has left to remind her of life before. Before, Hanna was going to be a famous concert pianist. She was going to wear her yellow dress to a dance. And she was going to dance with a boy. But then the Nazis came. Now it is up to Hanna to do all she can to keep her mother and sister alive, even if that means playing piano for the commandant and his guests. Staying alive isn’t supposed to include falling in love with the commandant’s son. But Karl Jager is beautiful, and his aloofness belies a secret. And war makes you do dangerous things.

Marcolino hates practicing his scales on the piano, but feels he must because he is the reason his mother never became a grand pianist–until his grandfather lets them both in on a little secret.

By the time she was 12, she was considered one of the finest pianists in Europe, but today few people know her name. Maria Mozart, like her famous brother Wolfgang, was a musical prodigy. The talented siblings toured Europe, playing before kings and empresses, were showered with gifts and favors, and lived in a whirlwind life of music and travel. They were best friends, collaborators, and confidantes. As they grew older, Wolfgang was encouraged to pursue his musical ambitions, while Maria was told she must stop performing and, ultimately, marry. But she was determined to continue playing the piano every day, for the love of music…. From the Hardcover edition.

In February 1938, in Vienna, twelve-year-old Greta Radky is devastated to learn that her mother plans to sell the family piano. Greta’s brother, a concert pianist, died the previous April, and her mother thinks of the piano as his. But Greta is an equally committed musician, and when she meets a mysterious piano teacher who agrees to work with her, she proves it. With his help the piano is saved, and inspired by his tiny angel doll, Greta practices furiously for her first recital. Then, on the day of the performance, the Nazis invade Austria. Suddenly Greta discovers her teacher’s secret and knows that his life is in danger. Having stood up to her mother, Greta must now confront the Nazis.

He started learning to play the piano when he was 3 years old in Shenyang, China. Today he is one of the world’s most outstanding pianists. In this engrossing life story, adapted by Michael French, Lang Lang not only recounts the difficult, often thrilling, events of his early days, but also shares his perspective on his rapidly changing homeland. He thoughtfully explores the differences between East and West, especially in the realm of classical music and cultural life. Shining through his rags-to-riches story of a child prodigy who came of age as a renowned musician, Lang Lang’s positive spirit, his dynamic personality, and his enduring passion for music will inspire readers of all ages.