A stray kitty gets a job in a sumo stable, chasing mice in exchange for food. But when eating like a sumo wrestler slows our feline hero down, he realizes he must train like a wrestler, too. Through hard work and perseverance–and with a little help from a big buddy–SumoKitty is born! A funny and heartwarming story inspired by the Japanese saying “Fall down seven times, stand up eight.” 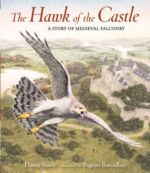 Join a young girl and her father, the falconer at a medieval castle, as they experience the joys of taking a goshawk out for a training flight.

Even though he has only one leg, Niya Moto is studying to be a samurai, and his five fellow-students are similarly burdened, but sensei Ki-Yaga, an ancient but legendary warrior, teaches them not only physical skills but mental and spiritual ones as well, so that they are well-equipped to face their most formidable opponents at the annual Samurai Games.

Invites the reader to find different Moshis, which are small white rabbits that love to wear different outfits, in a variety of scenes as Strawberry Moshi prepares for a ball.

In a charming twist on the “boy wants dog” story, this time it’s a dog who begs his mama for a boy, promising to feed it, play with it and walk it; Mama points out that boys are very difficult to train, but Dog knows what he wants and in the end, the determined little canine’s perseverance pays off.

The authors recount how the trained elephants of southern India, in particular the one chosen to be the lead elephant in the Mysore Dasara, are raised, cared for, and prepared for performing in ceremonial processions. 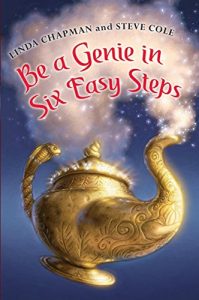 Be careful what you wish for. . . . When new stepsiblings Milly, Michael, Jason, and Jess move to a town in the middle of nowhere, the last thing they expect is to find a magic book. But then they stumble upon The Genie Handbook, and their lives are changed forever. Each chapter in The Genie Handbook contains one of six stages of training to be mastered, and the kids are thrilled to begin their schooling—especially since once they become genies, they can wish themselves back to London and their old lives. But then some of the wishes go wrong, and the magic starts to seem scarier. And when the kids discover a mysterious couple watching them covertly, they realize there’s more to the handbook than they ever could have guessed. If the children’s greatest wish of all is finally granted, will their world change for better or for worse? Maybe sometimes it takes something even more powerful than a genie to reveal your true heart’s desire.

A twelve-year-old boy learns about death and the conflicts that grip his Central American country when he’s pressed into military service and trained as a soldier.

After fleeing Ojai, Nicholas, Sophie, Josh, and Scatty emerge in Paris, the City of Lights. Home for Nicholas Flamel. Only this homecoming is anything but sweet. Perenell is still locked up back in Alcatraz and Paris is teeming with enemies. Nicollo Machiavelli, immortal author and celebrated art collector, is working for Dee. He’s after them, and time is running out for Nicholas and Perenell. For every day spent without the Book of Abraham the Mage, they age one year and so their magic is becoming weaker and their bodies more frail. For Flamel, the Prophesy is becoming more and more clear. It’s time for Sophie to learn the second elemental magic: Fire Magic. And there’s only one man who can teach it to her: Flamel’s old student, the Comte de Saint-Germain—alchemist, magician, and rock star. Josh and Sophie Newman are the world’s only hope—if they don’t turn on each other first.