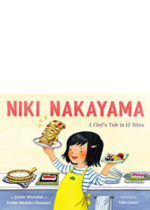 As a child and adult, Niki faced many naysayers in her pursuit of haute cuisine. To anyone who tells her a woman can’t be a master chef, Niki lets her food do the talking. And oh, does it talk. Niki was featured on the first season of Netflix’s culinary documentary series Chef’s Table. And Chrissy Teigen proclaimed that Niki’s restaurant was one of her absolute favorites. She’s currently a featured teacher on MasterClass.

Back in the days of long skirts and afternoon teas, young Joan Procter entertained the most unusual party guests: slithery and scaly ones, who turned over teacups and crawled past the crumpets…. While other girls played with dolls, Joan preferred the company of reptiles. She carried her favorite lizard with her everywhere–she even brought a crocodile to school!

On a lively street in the lovely city of Paris, a girl named Aída glanced up and was dazzled by the sight of an airship. Oh, how she wished she could soar through the sky like that! The inventor of the airship, Alberto, invited Aída to ride with him, but she didn’t want to be a passenger. She wanted to be the pilot. Aída was just a teenager, and no woman or girl had ever flown before. She didn’t let that stop her, though. All she needed was courage and a chance to try. 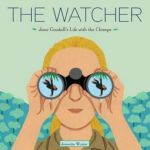 Acclaimed picture book biographer Jeanette Winter has found her perfect subject: Jane Goodall, the great observer of chimpanzees. Follow Jane from her childhood in London watching a robin on her windowsill, to her years in the African forests of Gombe, Tanzania, invited by brilliant scientist Louis Leakey to observe chimps, to her worldwide crusade to save these primates who are now in danger of extinction, and their habitat. Young animal lovers and Winter’s many fans will welcome this fascinating and moving portrait of an extraordinary person and the animals to whom she has dedicated her life.

Pura Belpre Honor winner for The Revolution of Evelyn Serrano and one of America’s most influential Hispanics–‘Maria’ on Sesame Street–delivers a beautifully wrought coming-of-age memoir. Set in the 1950s in the Bronx, this is the story of a girl with a dream. Emmy award-winning actress and writer Sonia Manzano plunges us into the daily lives of a Latino family that is loving–and troubled. This is Sonia’s own story rendered with an unforgettable narrative power. When readers meet young Sonia, she is a child living amidst the squalor of a boisterous home that is filled with noisy relatives and nosy neighbors. Each day she is glued to the TV screen that blots out the painful realities of her existence and also illuminates the possibilities that lie ahead. But–click!–when the TV goes off, Sonia is taken back to real-life–the cramped, colorful world of her neighborhood and an alcoholic father. But it is Sonia’s dream of becoming an actress that keeps her afloat among the turbulence of her life and times. Spiced with culture, heartache, and humor, this memoir paints a lasting portrait of a girl’s resilience as she grows up to become an inspiration to millions.

Focusing on the lives of immigrants to the USA from all over South Asia, this collection of essays challenges stereotypes by allowing women to speak in their own words. This provides insight into the reconstruction of immigrant patriarchy in the USA and the development of female resistence to this.

On June 12, 2005, hundreds of women gathered outside Tehran University in Tehran, Iran. These women were protesting an issue that Iranian women have battled for more than one hundred years: gender inequality. Living in a conservative Muslim culture, Iranian women are subjected to discriminatory laws that serve the male-dominated society. In the 1900s, Iranian women began protesting unjust laws and fighting for equality. For a time, under monarchs wishing to modernize, Iran became more lenient. Women began dressing as they wished, mixing socially with men, and working outside their homes. But after the Islamic Revolution of 1979, harsh punishments for moral offenses again became law. Iranian women continue to struggle against an oppressive regime, but they refuse to stop protesting. Iranian women have been punished and discriminated against by their patriarchal government, but yet they maintain their pursuit of equal rights.

From the deepest heart of the Moghul palace, her face hidden by veils, Nur Jahan came to rule all of Mogul India. This book tells the story of how she introduced efficiencies, encouraged trade, and made possible a great flowering of the arts. She hunted tigers, rode elephants to war, commanded a nation from behind a curtain, and did many other things that girls were not expected to do. Sections on the clothes Nur Jahan wore, the foods she ate, and why she is remembered today are included.

This book introduces inspiring women whose passions for exploration made them push the boundaries, including Nellie Cashman, Annie Smith Peck, and Delia Julia Denning Akeley.

A collection of twenty stories about legendary American women, drawing from folktales, popular stories, and ballads.