Ranging from Puerto Rico to Cuba and the United States, this engaging novel for teens follows historical figures that were instrumental in the fight for self-determination in Puerto Rico. Addressing issues that remain relevant today racism, women’s rights and Puerto Rico’s status. The Season of Rebels and Roses also sheds light on women’s involvement in their nation’s liberation and their own.

Sixteen-year-olds Leena and Mishie are best friends. They delight in small rebellions against the Saudi cultural police―secret Western clothing, forbidden music, flirtations. But Leena wants college, independence―she wants a different life. Though her story is specific to her world (a world where it’s illegal for women to drive, where a ten-year-old boy is the natural choice as guardian of a fatherless woman), ultimately it’s a story about friendship, family, and freedom that transcends cultural differences.

From the early days of the antislavery movement, when political action by women was frowned upon, British and American women were tireless and uncompromising campaigners. Without their efforts, emancipation would have taken much longer. And the commitment of today’s women, who fight against human trafficking and child slavery, descends directly from that of the early female activists.

On June 12, 2005, hundreds of women gathered outside Tehran University in Tehran, Iran. These women were protesting an issue that Iranian women have battled for more than one hundred years: gender inequality. Living in a conservative Muslim culture, Iranian women are subjected to discriminatory laws that serve the male-dominated society. In the 1900s, Iranian women began protesting unjust laws and fighting for equality. For a time, under monarchs wishing to modernize, Iran became more lenient. Women began dressing as they wished, mixing socially with men, and working outside their homes. But after the Islamic Revolution of 1979, harsh punishments for moral offenses again became law. Iranian women continue to struggle against an oppressive regime, but they refuse to stop protesting. Iranian women have been punished and discriminated against by their patriarchal government, but yet they maintain their pursuit of equal rights. 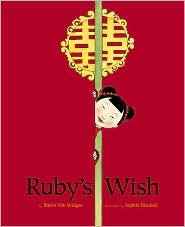 Ruby is unlike most little girls in old China. Instead of aspiring to get married, Ruby is determined to attend university when she grows up, just like the boys in her family. Based upon the inspirational story of the author’s grandmother and accompanied by richly detailed illustrations, this is an engaging portrait of a young girl who strives for more and a family who rewards her hard work and courage.

Seventeen-year-old Angelica Voglia has the voice of an angel. But in seventeenth-century Rome, the pope has forbidden women to sing in public. To make matters worse, her controlling mother is determined to marry her off to a wealthy nobleman, even though Angelica is in love with a poor French artist. Angelica’s only hope to sing before an audience—and escape a forced marriage—is to flee to Queen Christina’s court, where she will become the queen’s soprano. But she soon discovers that the palace walls are not completely secure . . . and her freedom will require even greater sacrifice than she imagined.

A female pharaoh? A woman general in the Kahn’s army? A female Viking raider? No way, you say? Look again. Appearances can be deceiving… Based on legends, poems, letters and first-hand accounts, these seven biographical tales tell of women who disguised themselves as men. From ancient Egypt through the Middle Ages to the 19th century, this historically accurate graphic treatment is perfect to transport readers back to bygone eras. The lives of these daring women were often filled with danger and the fear of discovery. However, for the sake of freedom, ambition, love or adventure, these women risked everything. No Girls Allowed brings a contemporary edge to a part of history largely untold – until now. 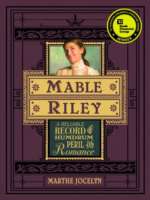 It is 1901 and Mable Riley dreams of adventure and of becoming a writer. When her older sister leaves home to become a schoolmistress in the small town of Stratford, Ontario, Mable is sent along too. Mable hopes her new world will be full of peril and romance. But life at the Goodhand Farm (where the sisters board), is as humdrum as the one she’s left behind.Then Mable encounters the mysterious Mrs. Rattle, a peculiar widow with a taste for upsetting the townspeople with her strange opinions. Mrs. Rattle is a real writer, and Mable eagerly accepts her invitation to a meeting of the Ladies Reading Society. But the ladies are not discussing books at all, and Mable may soon have more peril than she’d bargained for!Composed of the letters Mable sends home, the poems she writes for her classmates, and chapters from her own work-in-progress, Mable Riley is the funny, inspiring, (and reliable) record of a young girl finding her voice, and the courage to make it heard.