In ancient Mexico, the beautiful and magical grandchildren of the Sun God are endangered by the threat of Seänor Tiempo who, jealous of their immortality, plots to destroy them.

How did the camel get his hump? How did the leopard get his spots? How did the elephant get his trunk? These are questions that children around the world have asked for centuries, but it took Nobel Prize winner Rudyard Kipling’s lively, hilarious stories to give them answers. For one hundred years, these classic tales, drawn from the oral storytelling traditions of India and Africa and filled with mischievously clever animals and people, have entertained young and old alike.Intertwined within these delightful tales are little pearls of wisdom about the pitfalls of arrogance and pride and the importance of curiosity, imagination, and inventiveness.

Twin fawns Geno and Gurri are the children of Faline and Bambi. The pair must grow up and navigate the world of the woods with the help of their mother and Bambi, the new Prince of the Forest. But for young fawns, the wild can be dangerous. Gurri is injured by a fox and has a run-in with the most dangerous of creatures: man. Geno is challenged by rival deer and worries about the impending fight. But when the family begins to fall apart, it is the familiar presence of Bambi who tries to set it right again.

“She plunged beneath the surface, her eyes blind in the murky, green water: dived again and again until she couldn’t take another breath. There was no trace. Freya was gone.” Jess has heard the rumours, old folk tales of creatures that live beneath the water: dangerous shapeshifters with a taste for human children. She’s dismissed them as crazy stories — until her best friend is stolen and Jess discovers all the legends are true Trying to rescue her friend, she meets one of them — a kelpie — but he turns out to be nothing like she imagined. Caught between two worlds, between kelpies and humans, and between mysterious Finn and brave Magnus, Jess must chose between what she’s always known and what lies beneath. Gill Arbuthnott creates an enthralling world of love and revenge, divided loyalties and imminent danger in this brilliant fantasy novel for young teens set in 16th century Scotland.

Destined to take over his family farm in Norrøngard, Karn would rather play the board game, Thrones and Bones, until half-human, half frost giantess Thianna appears and they set out on an adventure, chased by a dragon, undead warriors, an evil uncle, and more.

Two brothers who love each other dearly inherit their father’s land and live on opposite sides of a hill. When King Solomon witnesses the brothers’ simple acts of kindness, a miracle occurs, leading to the creation of the holy temple and ancient city of Jerusalem. 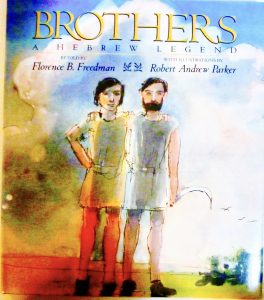 Hard times on adjoining farms bring about parallel acts of kindness and a celebration of “how good it is for brothers to live together in friendship.”