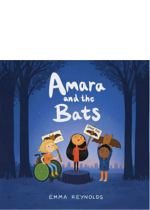 Amara loves bats! Her favorite thing to do is to collect bat facts and watch the amazing mammals fly at night by her house. But when Amara moves to a new town, she learns that her beloved bats no longer roost nearby because so many trees are being cut down.

In a small village in India, a boy grows up to make a huge difference in his community by planting trees to celebrate the birth of every girl. Based on a true story, this book celebrates environmental sustainability, community activism and ecofeminism. This is the story of Sundar Paliwal, who is from a small Indian village ruled by ancient customs.

All children have the right to learn about the world, to celebrate the water, air and sunshine, and to be curious about the animals and plants that live on our planet. All children also have the right to learn about endangered species, to be concerned about plastic in the ocean, and to understand what a changing climate means for our Earth. What can children do to help? Told from the perspective of a child, this colorful and vibrant book explores what it means to be a child who dreams of a beautiful future for their planet.

“Usha lives in a town where the sun hasn’t shone for as long as anyone can remember. Only her grandfather remembers its brilliance, and tells Usha stories about the time before other people took the sun away, building a wall to keep it all to themselves. So Usha decides to do something, and sets off in search of the sun. When at last Usha reaches the wall, she tries to kick it down, climb it, yell her way through it-but the bricks don’t budge. It’s only after hearing voices on the other side of the wall that Usha changes her plan. She sings, shares her grandfather’s stories, and piques the curiosity of the people on the other side until they are inspired to remove the bricks, one by one. Together, they bring the wall down. Inspired by the idea of peaceful protest, this book offers a timely message of cooperation and empathy”–

A Junior Library Guild Selection When Kim Hyun Sook started college in 1983 she was ready for her world to open up. After acing her exams and sort-of convincing her traditional mother that it was a good idea for a woman to go to college, she looked forward to soaking up the ideas of Western Literature far from the drudgery she was promised at her family’s restaurant. But literature class would prove to be just the start of a massive turning point, still focused on reading but with life-or-death stakes she never could have imagined. This was during South Korea’s Fifth Republic, a military regime that entrenched its power through censorship, torture, and the murder of protestors. In this charged political climate, with Molotov cocktails flying and fellow students disappearing for hours and returning with bruises, Hyun Sook sought refuge in the comfort of books. When the handsome young editor of the school newspaper invited her to his reading group, she expected to pop into the cafeteria to talk about Moby Dick, Hamlet, and The Scarlet Letter. Instead she found herself hiding in a basement as the youngest member of an underground banned book club. And as Hyun Sook soon discovered, in a totalitarian regime, the delights of discovering great works of illicit literature are quickly overshadowed by fear and violence as the walls close in. In BANNED BOOK CLUB, Hyun Sook shares a dramatic true story of political division, fear-mongering, anti-intellectualism, the death of democratic institutions, and the relentless rebellion of reading.

Stella gets a big surprise when her mom plans a trip to visit their family in Mexico! Stella loves marine animals, and she can’t wait to see the ocean for the first time . . . until she arrives and learns that the sea and its life forms are in danger due to pollution. Stella wants to save the ocean, but she knows she can’t do it alone. It’s going to take a lot of work and help from old and new friends to make a difference, but Stella Díaz never gives up! This is the second middle-grade novel from award-winning picture book author and illustrator Angela Dominguez. Based on the author’s experiences growing up Mexican-American, this infectiously charming character comes to life through relatable story-telling including simple Spanish vocabulary and adorable black-and-white art throughout. 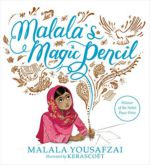 As a child in Pakistan, Malala made a wish for a magic pencil. She would use it to make everyone happy, to erase the smell of garbage from her city, to sleep an extra hour in the morning. But as she grew older, Malala saw that there were more important things to wish for. She saw a world that needed fixing. And even if she never found a magic pencil, Malala realized that she could still work hard every day to make her wishes come true.

Sam, Otter, Atim and Chickadee are four cousins growing up on the Windy Lake First Nation. They are inseparable. Nicknamed the Mighty Muskrats for their habit of laughing, fighting and adventuring together, the cousins find that each new exploit adds to their reputation. When a visiting archeologist goes missing, the cousins decide to solve the mystery of his disappearance. In the midst of community conflict, family concerns and environmental protests, the four get busy following every lead. From their base of operations in a fort made out of an old school bus, the Mighty Muskrats won’t let anything stop them from solving their case!

Nelson Mandela’s two great-grandchildren ask their grandmother, Mandela’s youngest daughter, 15 questions about their grandad – the global icon of peace and forgiveness who spent 27 years in prison. They learn that he was a freedom fighter who put down his weapons for the sake of peace, and who then became the President of South Africa and a Nobel Peace Prize-winner, and realise that they can continue his legacy in the world today. Seen through a child’s perspective, and authored jointly by Nelson Mandela’s great-grandchildren and daughter, this amazing story is told as never before to celebrate what would have been Nelson’s Mandela 100th birthday.

Zanele is skipping school and secretly plotting against the apartheid government. The police can’t know. Her mother and sister can’t know. Her best friend Thabo, schoolboy turned gang member, can tell she’s up to something. But he has troubles of his own–a deal gone wrong and some powerful enemies. Across the bridge, in the wealthy white suburbs, Jack plans to spend his last days in Johannesburg burning miles on his beat-up Mustang–until he meets a girl with an unforgettable face from the simmering black township–Soweto. Working in her father’s shop, Meena finds a packet of banned pamphlets. They lead to a mysterious black girl with a secret, a dangerous gangster with an expensive taste in clothes, and an engaging white boy who drives a battered red car. A series of chance meetings changes everything. A chain of events is set in motion–a failed plot, a murdered teacher, and a secret movement of students that has spread across the township. And the students will rise.