Before Freud, nobody discussed “unconscious” motives, Oedipal complexes, the id and the ego, or Freudian slips. Freud was a complicated, often irascible man, who in 19th-century Vienna developed his still-controversial ideas and the new discipline of psyc.

In 1885, few Jews in Israel used the holy language of their ancestors, and Hebrew was in danger of being lost—until Ben Zion and his father got involved. Through the help of his father and a community of children, Ben modernized the ancient language, creating a lexicon of new, modern words to bring Hebrew back into common usage. Historically influenced dialogue, engaging characters, and colorful art offer a linguistic journey about how language develops and how one person’s perseverance can make a real difference.

Tokyo lives in a small house between giant buildings with his family and his cat, Kevin. For years, highways and skyscrapers have been built up around the family’s house where once there were hills and trees. Will they ever experience the natural world again? One day, an old woman offers Tokyo seeds, telling him they will grow into whatever he wishes. Tokyo and his grandfather are astonished when the seeds grow into a forest so lush that it takes over the entire city overnight. 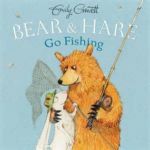 Bear becomes frustrated during a fishing trip with his friend Hare, who organizes a picnic while Bear catches a hat, a roller skate, and everything except an actual fish.

A small papery bundle hangs under a leaf by a silken thread. Can you guess what it will be one day? Butterflies, polar bears, turtles, frogs, birds – they all have a fascinating life journey to follow. Peek under each large flap and look at colorful spreads to find out how each animal develops. A final spread invites readers to match each fullgrown creature with its beginning stage.

“Hold on to the saddle, pony might prance, bucking and frisky, he’s roaming the ranch. GIDDY-UP!”A pony inspires a child to ride high on her father’s shoulders, a sailboat stirs two others to set off to sea in a cardboard box, and an airplane invites kids to soar like a bird.In 13 striking spreads, we see how children use the world around them as the inspiration for play. Vibrant photographs are juxtaposed with lively drawings to reveal the child’s own inventive interpretation. Short bursts of action-packed, rhythmic poetry encourage preschoolers to identify the patterning throughout the text and the sounds associated with each idea.While developing language skills, kids can join in the fun as they create their own imaginative play from what they see around them. 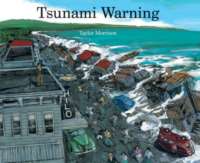 In 2004 tsunamis in the Indian Ocean swept over entire islands, wiping some of them completely off the map and killing more than 230,000 people. Unfortunately, tsunamis like these cannot be stopped, but they can be better understood. What causes these huge waves to form? How can they be detected? And what can be done to alert people that these fast-moving waves are approaching?As author and illustrator Taylor Morrison explains, ever since a deadly tsunami hit Hawaii in 1946, scientists have been hard at work, developing the first Seismic Sea Wave Warning System and studying these powerful waves in hopes of saving lives by decreasing false alarms and by reacting with greater speed and accuracy to real threats.