Some things are so huge or so old that it’s hard to wrap your mind around them. But what if we took these big, hard-to-imagine objects and events and compared them to things we can see, feel and touch? Instantly, we’d see our world in a whole new way. So begins this endlessly intriguing guide to better understanding all those really big ideas and numbers children come across on a regular basis.

A group of aliens on a field trip visit each of the continents on Earth and learn about some of their unique features.

Just what exactly is the “thing”? It is green—great and gorgeous green, dark and dangerous green, real mean green. Both a riddle and an ode to the earth, this picture book arrives just in time for Earth Day. Readers will revisit the world after the riddle’s reveal to find the many green things hidden in each piece of art.

Olga the cloud’s wonderful day comes to an end when, after being chased off the moon where she was trying to nap, she has a terrible time finding the right place to make some rain.

In a lyrical poem (which is also a riddle) and stunning linoleum block prints, Libby Hathorn and Peter Gouldthrope guide readers on a journey around the world–and to a deeper appreciation of “the wonder thing” that is all around us. 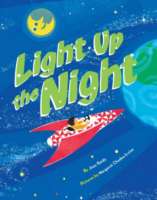 In this cumulative, rhyming story, a young boy takes a nighttime ride from the distant stars in the Milky Way galaxy to his cozy bed, as his blanket becomes a rocket, a plane, and a skateboard.

A book on global warming like no other, merging key concepts with firsthand accounts from people of all ages who have found ways to help. Inspired by the work of outstanding scientist and thinker James Lovelock and written by acclaimed author Nicola Davies, here is a book that takes a clear look at how and why Earth’s climate is changing and the ways we can deal with it. 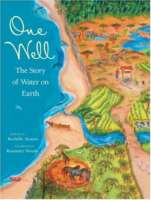 Seen from space, our planet looks blue. This is because almost 70 percent of Earth’s surface is covered with water. Earth is the only planet with liquid water — and therefore the only planet that can support life. All water is connected. Every raindrop, lake, underground river and glacier is part of a single global well. Water has the power to change everything — a single splash can sprout a seed, quench a thirst, provide a habitat, generate energy and sustain life. How we treat the water in the well will affect every species on the planet, now and for years to come. One Well shows how every one of us has the power to conserve and protect our global well.

In a Fox Called Sorrow, the adventures continue for Little Fur, the half elf, half troll girl who heals animals in a magical grove in the heart of a big city. When Little Fur discovers that the Troll King is plotting against the earth spirit that binds all living things, she sets off on a new adventure with a set of unlikely companions: the faithful cat Ginger, a reluctant rat, a pair of ferrets, and a mysterious fox called Sorrow who believes their quest is doomed. 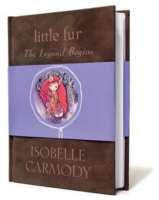 Little Fur is a half elf, half troll, as tall as a three-year-old human child, with slanted green eyes, wild red hair that brambles about her pointed ears, and bare, broad, four-toed feet. Little Fur loves and tends to the Old Ones, the seven ancient trees that protect her home, a small, magical wilderness nestled magically in a park in the midst of a large, bustling human city. When she learns that evil forces are out to destroy her beloved trees, the intrepid halfling must embark on an ambitious and dangerous journey into the human world and down into an ancient cut in the earth, in search of a way to save not only the Old Ones, but the Earth Spirit itself.