Four girls discover that they are part of a timeless battle that pits good against evil. They have the ability to turn into large cats and an ancient duty to protect civilization from evil demons who want to rule.

A collection of fantasy short stories plus a novella that is set in the world of the Abhorsen trilogy. Thoughts of Lirael and Sam haunt his dreams, and he has come to realize that his destiny lies there, along with all those he cares for. But here in Ancelstierre, far south of the Wall, the Charter is dormant, and among the obstacles Nick faces is one that is not entirely human, and which has a strange power that seems to come from Nicholas himself.

Sixth-year Hogwarts student Harry Potter gains valuable insights into the boy Voldemort once was, even as his own world is transformed by maturing friendships, schoolwork assistance from an unexpected source, and devastating losses.

“The hour has come to speak of troubled times. It is time we spoke of Skullyville.” Thus begins Rose Goode’s story of her growing up in Indian Territory in pre-statehood Oklahoma. Skullyville, a once-thriving Choctaw community, was destroyed by land-grabbers, culminating in the arson on New Year’s Eve, 1896, of New Hope Academy for Girls. Twenty Choctaw girls died, but Rose escaped. She is blessed by the presence of her grandmother Pokoni and her grandfather Amafo, both respected elders who understand the old ways. Soon after the fire, the white sheriff beats Amafo in front of the town’s people, humiliating him. Instead of asking the Choctaw community to avenge the beating, her grandfather decides to follow the path of forgiveness. And so unwinds this tale of mystery, Indian-style magical realism, and deep wisdom.

Katerina Alexandrovna, Duchess of Oldenburg, wants to be known as a doctor, not a necromancer. But Tsar Alexander III forbids women to attend medical school; his interest in Katerina extends only to her ability to raise the dead. Twice now, Katerina has helped him by using her power to thwart the forces of darkness—vampires bent on resurrecting the lich tsar Konstantin Pavlovich so that he can take what he sees as his rightful place on the throne. Katerina thought she had bound Konstantin to the Greylands, the realm of the dead, but he has found a way out. Now he is searching for the Morning Star, a sword that will allow him to command a legion of supernatural warriors.

When Obadiah Demurral, the power-hungry Vicar of Thorpe, attempts to become a god by dabbling in magic, Raphah, who has come from Africa to get back the artifact stolen from his Temple, joins forces with Kate and Thomas to stop him. 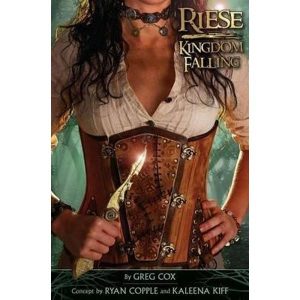 Riese has never been happy as a princess; she’d much rather be hunting or fighting than sitting through another lesson on court etiquette. When she meets Micah, a wandering artist with a mysterious past, she pretends to be a peasant–it’s a chance to be just a normal girl with a normal boy for a while. But with war decimating her once-proud nation and the sinister clockwork Sect infiltrating her mother’s court, Riese’s moments with Micah are the only islands of sanity left in a world gone mad. As her kingdom falls and the Sect grows ever stronger, will Riese remain true to her duty as a princess…or risk everything on a boy she barely knows?

After the apocalypse wipes out most of the world’s population and unleashes an ancient evil, murderous Baggers begin to create a new world order and teenagers Aries, Clementine, Mason and Michael must learn how to trust and rely on each other in order to survive.

When the Blue Star Warriors seek to infiltrate Uro’s fiercely guarded headquarters as they try to save the Pillar of Wind from destruction, Doug is captured by soldiers and Naomi and Fly are transported back to the planet of Blue Star, revealing the mysterious pathways connecting galaxies while exposing some of Uro’s weaknesses.