In this twist on the classic song “The Wheels on the Bus,” the wheels on the tuk tuk go round and round all over the city in India.

Following some food, a curious young sparrow stows away in the back of a truck and takes an unusual voyage south — through the lush rice paddies of India, across the rough sea, and all the way into a bright new day. As the sun rises high over the city, he finds little Edie at a café with her grandma and granddad, and for a fleeting instant, his world meets up with hers and changes her life in the most delightful way. 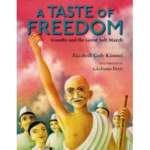 An old man in India recalls how, when he was a young boy, he got his first taste of freedom as he and his brother joined the great Muhatma Gandhi on a march to the sea to make salt in defiance of British law.

The true and tragic story of one of the most famous elephants of all time: Queenie, the gentle Indian elephant. Evoking a time when elephants were giving rides in zoos all around the world, the true story of Queenie follows her from her birth in an Indian jungle to Australia’s Melbourne Zoo, where she lived for more than forty years.

This book introduces the different culinary regions of India and presents many kinds of recipes for traditional Indian dishes. 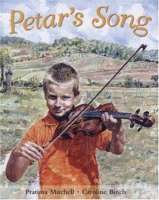 Petar has a happy and loving family, but they are forced to evacuate and leave his father behind during a war, and only the thought of peace can bring back his love of music and inspire him to play the violin again.

Each colorful book in this series describes what an explorer’s life was really like on an expedition, from what they wore to what they ate, and includes colorful maps and images showing the areas explored; a look at the political climates of various countries that made explorers venture out into the unknown; and an examination of how explorers lived while on the high seas, on the trail, or in the encampment.

Eleven-year old Dini loves movies—watching them, reading about them, trying to write her own—especially Bollywood movies. But when her mother tells her some big news, it does not at all jive with the script of her life she has in mind. Her family is moving to India…and, not even to Bombay, which is the center of the Bollywood universe and home to Dini’s all-time most favorite star, Dolly. No, Dini is moving to a teeny, tiny village she can’t even find on a map. Swapnagiri. It means Dream Mountain and it only looks like a word that’s hard to pronounce. But to that open-minded person who sounds the name out, one letter at a time, it falls quite handily into place: S-w-a-p-n-a-g-i-r-i. An honest sort of name, with no surprise letters waiting to leap out and ambush the unwary. That doesn’t mean there aren’t surprises in Swapnagiri like mischievous monkeys and a girl who chirps like a bird—and the biggest surprise of all: Dolly. So now, Dini is hard at work on a new script, the script in which she gets to meet the amazing Dolly. But, life is often more unpredictable than the movies and when Dini starts plotting her story things get a little out of control. This is a joyful, lively Bollywood inspired story is full of colorful details, delicious confections and the wondrous, magical powers of coincidence. Uma Krisnaswami will have you smiling from ear to ear.

Aneel s grandparents have come to stay, all the way from India. Aneel loves the sweet smell of his grandmother s incense, and his grandfather, Dada-ji, tells the world s best stories. When he was a boy, adventurous, energetic Dada-ji had the power of a tiger. Hunh-ji! Yes, sir! He could shake mangoes off trees and wrangle wild cobras. And what gave him his power? Fluffy-puffy hot, hot roti, with a bit of tongue-burning mango pickle. Does Dada-ji still have the power? Aneel wants to find out but first he has to figure out how to whip up a batch of hot, hot roti Overflowing with family, food, and a tall stack of fun, Hot, Hot Roti for Dada-ji is sure to warm the heart and tickle the tummy. Hunh-ji! Yes, sir!