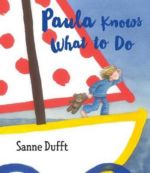 One Saturday morning, Daddy won’t get out of bed. He misses Paula’s mom. Paula misses her too, but she realizes that Mommy wouldn’t want them to be sad forever. Paula knows just what to do. Taking out paper and paints, Paula creates a world of rolling seas, blue skies, and―best of all―a boat that she and Dad can sail together. And when the wind blows up a storm, Paula knows just what she and Daddy can do about that too. In this sweet and poignant story about memory and overcoming grief, Sanne Dufft, the author/illustrator of The Night Lion shows how a child’s imagination can find a moment of joy and a safe place to land after a loved one is gone.

After losing her parents, 14-year-old Victoria and her young twin brothers move in with their aunt. But shortly afterward, her aunt’s boyfriend attempts to assault her, and she runs away and learns to survive on the dangerous streets of Paraná, Argentina. Encountering a world of street kids, gangs and drug dealers, Victoria overcomes deprivation and great hardship. With the help of newly-found friends and her single-minded determination to survive, she carves out a new life for herself and her little brothers.

A kindly gendarme conducts two young children around Paris in search of their lost mother.

When his mother dies, a little boy is angry at his loss but does everything he can to hold onto the memory of her scent, her voice, and the special things she did for him, even as he tries to help his father and grandmother cope.

Cindy, a savvy yet cynical teenager, still traumatized by her mother’s recent death, is appalled when her father falls in love with one of her teachers, a woman with two teenage daughters of her own. She cannot imagine a worse fate than having her teacher as her stepmother, and as for the two prissy girls, she is never going to call them sisters . . . no way! But if Cindy dislikes her prospective sisters, Ashling and Orla think she is an absolute horror — spoiled, arrogant, and atrociously rude to them and their mother when they visit her house. Will the girls ever get along and learn to be a family? Featuring the girls’ stories in two unique, back-to-back diaries, one for Cindy and the other for Ashling and Orla, readers can choose which story to begin with and will enjoy the varying viewpoints recording the same events.

Shadows fall across the beautiful, lush kingdom after the queen is attacked by an unnatural beast, and the healing skills of her daughter, Alexandra, cannot save her. Too soon the widowed king is spellbound by a frightening stranger, a woman whose eyes reflect no light. In a terrifying moment, all Alexandra knows disappears, including her beloved brothers, leaving her banished to a barren land. But Alexandra has more gifts than she realizes as she confronts magic, murder, and the strongest of evil forces, and is unflinchingly brave as she struggles to reclaim what is rightfully hers.

“I was born, like my seven brothers and sisters, in a house atop a hill overlooking lovely Bras d’Or Lake”. So begins Christy MacKinnon’s story of life as a little girl in 19th-century Nova Scotia, Canada. Through wonderful images created with her own words and her watercolors, she tells of a simple, charming life on the family farm; of learning with her father, the master of her town’s one-room schoolhouse; and of her eventual travel to Halifax to attend a “special” school. As with many children in the 1800s, Christy became deaf after a “seige of whooping cough”, a sickness common then, which she barely survived.

Silent Observer opens to young readers a world rarely seen today. They will be thrilled by her family’s ride in a horse-drawn sleigh over a frozen northern lake, and her close encounters with a noisy bull and a “gentleman” ram. Children and adults alike will warm to her cheerful memories of the simple pleasure of playing in a flower-filled field with her brothers and sisters. They will discover, too, that young Christy crossed paths with many vital figures of the day, beginning with frequent visits by Alexander Graham Bell, and later with a momentous meeting with Helen Keller.

Silent Observer is a delightful memoir told as it was seen through the eyes of a lively child. It is also a meaningful record of life for a deaf child and her family in the far reaches of Canada at the end of an era. Silent Observer is a beautiful, sensitive story that is sure to be enjoyed by everyone.

Andrei and Vova set out in the great city of St. Petersburg to find Andrei’s mama.