The sounds of lapping water and dipping oars ease readers into the famous canals of Venice, Italy. With mother as gondolier and father singing his calming song to baby, a family floats serenely through this one-of-a-kind historic city, past features as unusual as stone winged lions and golden masks and as comfortably familiar as babbling neighbors and drying laundry. The baby drifts deeper and deeper into Venice’s maze and―finally―sweet sleep.

It is 1900, and the evil traitor, Bajamonte Tiepolo, is back, his baddened magic spreading across the globe. Now Teo and Renzo must save both Venice and London, before it is too late.

When Laura della Scala’s older sister drowns, Laura leaves the shelter of the convent where she has spent the last six years and enters the upper echelons of sixteenth-century Venetian society, while she searches for the truth about what happened to her sister.

Living happily with her mother and father, Cinderella finds her life beginning to unravel with the death of her mother and her father’s remarriage, in a beautifully illustrated retelling of the traditional tale set against the romantic backdrop of Venice.

While studying under Vivaldi, three girls in a Venice orphanage forge their own notions of love in a sensuous, engrossing novel told in three narrative voices. It is a longing and search for love that motivates three girls living in the Ospedale della Pietà, an orphanage renowned for its extraordinary musical program. But for Rosalba, Anetta, and Luisa, the love they seek is not where they expect to find it. Set in the early 1700s in the heart of Venice, this remarkable novel deftly weaves the history of Antonio Vivaldi’s early musical career into the lives of three young women who excel in voice and instrument.

Sixteen-year-old Jessica, who longs to be free of the restrictions of her father and life in the Jewish ghetto of sixteen-century Venice, falls in love with a Christian aristocrat and must make choices which will affect her whole family. Inspired by Shakespeare’s play The Merchant of Venice.

The day Roberto and his friend Samuele are rounded up by German soldiers and put on a train marks both a beginning and an end. The boys have now become part of the war, providing forced labor for the Nazis at various work camps deep inside German territory. And it’s the ending to all they’ve known — before their lives as children in Venice, their innocence. For Roberto, the present is unbearable — backbreaking work, near starvation, and protecting Samuele’s secret that, if discovered, would mean death for both boys. Escape is Roberto’s only hope, but the Russian winter is upon the land — and any hope seems remote. 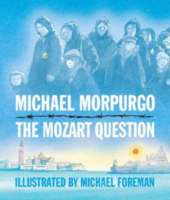 Like any young boy, Paolo becomes obsessed with what he can’t have — in his case, a violin. Hidden away in his parents’ room, it beckons the boy to release the music inside it. The music leads Paolo to a family secret, a story of World War II that changed the course of his parents’ lives. But once the truth is told, the family is reunited in a way no one had thought possible.

A young girl finds music all around her as she walks about the city of Venice, Italy, and she shares her song with everyone she meets.