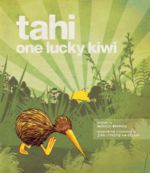 This is the true story of the remarkable team effort to save a kiwi that lost its leg. The fictional narrator of the story is a schoolboy who is doing a project on kiwi. This is very much a multi-layered story with the tale of the kiwi running alongside the story of the boy and his attempts to impress his teacher. As well as those stories, great factual detail about kiwi appears in the boy’s notebook on every spread. Weta Workshop, the Artificial Limb Centre and Wellington Zoo all joined forces to provide this kiwi with an artifical leg.

Dani is going on a school trip to the zoo, and the teacher tells the children how to stay safe and not get lost. But Dani gets separated from the others. Suddenly another class is rushing up to the path—and at the back of the noisy crowd is someone she recognizes: Ella! The good friends are so happy to be together again, and Ella wants to play. What should Dani do? Follow her best friend in the world or do as the teacher said? The first, of course!

What if you noticed a door in your bedroom that wasn’t there before? And what if it led to a passage to the zoo? You might want to take just one little bear back to your room with you, or maybe just all the smaller animals. But how could you resist the penguins and the tigers and the birds? In this classic child’s fantasy featuring John Burningham’s delightfully expressive artwork, an unlocked door leads to pandemonium — and one little girl’s formidable voice reins in an entire menagerie.

All the animals escape from the zoo, and it seems there is nothing the old zookeeper can do to bring them back. Then he wakes up. Thank goodness, it was only a dream! Or was it?…

Pulled from the pages of the wildly popular ZooBorns blog, this picture book presents the most charming critters ever: baby animals, ranging from the adorable to the zany! Featuring full-color photographs on every page and a cozy text perfect for reading aloud, this book is bound to become a must-have for animal lovers of all ages.

A little girl explores the zoo while her parents are searching for her. 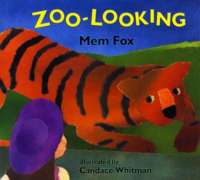 Beloved storyteller Mem Fox has created a lively rhyme for zoo-loving children to read and chant out loud.  Candace Whitman’s enchanting torn paper pictures add to the joyous fun of the story.

Orphaned as a child, terrorized by her abusive brother, and haunted by memories, Leia feels exposed, powerless, and vulnerable. When her tormented mind can stand it no longer, she escapes to the zoo, where she finds shelter and seeks refuge. The zoo is a sanctuary: a protective space for families, and a safe place for the traumatized to forget. But can she ever feel safe? Can she ever forget? Once again, Rune Michaels brings us a harrowing psychological drama that raises questions about the very nature of humanity.

The Baghdad zoo was once home to more than six hundred magnificent animals. But after the war in Iraq began in 2003, the city faced widespread destruction. When U. S. Army Captain William Sumner was asked to check out the state of the zoo, he found that it, too, was devastated. Hundreds of animals were missing, and the few remaining were in desperate need of care. And so Captain Sumner accepted a new mission. Together with an international team of zoologists, veterinarians, conservationists, and dedicated animal lovers, Captain Sumner worked tirelessly to save the neglected—but tenacious—animals of Baghdad. Saving the Baghdad Zoo tells the poignant stories of these remarkable animals. Meet the abandoned lions who roamed an empty palace with no food or drink; the camel, Lumpy, who survived transport through sniper fire; the tigers, Riley and Hope, who traveled 7,000 miles from home; and many more. The Baghdad Zoo, open once again to the people of Iraq, has become an oasis of hope and safety in a city where both are precious gifts.

A zookeeper recounts the story of John, Tonky, and Wanly, three performing elephants at the Ueno Zoo in Tokyo, whose turn it is to die, and of their keepers, who weep and pray that World War II will end so their beloved elephants might be saved.