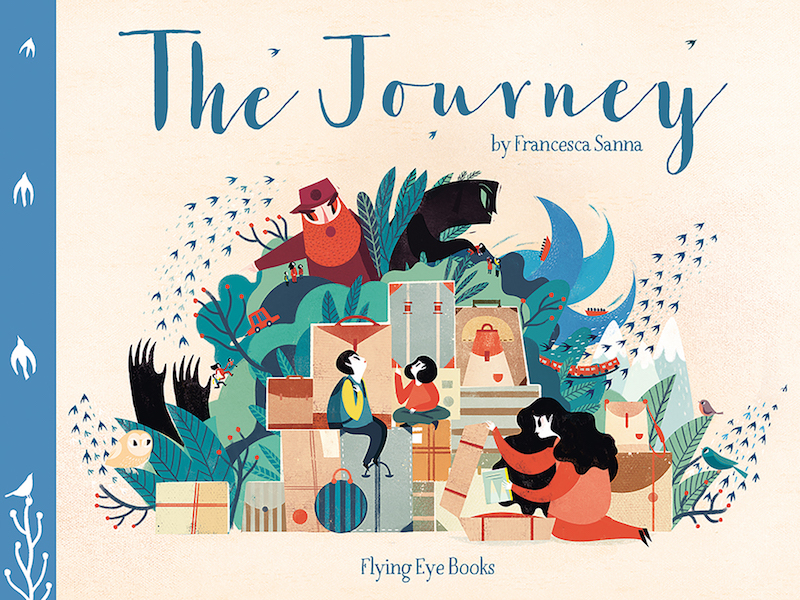 The Journey is a heartfelt refugee tale that speaks hauntingly of the horrors of unrest and war and their repercussions. The decisions of families during dire conditions are highlighted and the turmoil and tragedy of war is represented through both the visual and written text.

This picturebook begins a first-person account with an overall feeling of peace and harmony among people at the beach. The colors are muted and serene; the opening words, “I live with my family in a city close to the sea,” reinforce the scene. On the second page the sea becomes predominantly and alarmingly black with black hands reaching out into the peaceful scene as if taking it apart and tearing it to shreds. Then the father is killed and the family decides to flee. The image that represents the death of the father is an all-dark black, double-page spread with a few of his personal belongings linearly and metaphorically representing him. The journey of these characters is a long and arduous one, where danger lurks at every step. They pack whatever they can carry and travel by cars, busses, trains and a boat in an effort to reach safety. The mother tells her children, “our journey is not over yet,” as they must cross many borders, through land, sea and mountains.

The characters belong to a Muslim country but it is not specified as to which exact region. This opens the story to a number of regions that have war or unrest and that are predominantly Muslim. Diversity is represented through attire of the various female characters; the mom is shown with her dark hair lush and flowing whilst her friends wear traditional headgear (hijab).

This family of three comes across various challenges during their journey. Scale and size in the visual narrative weighs strongly on the meaning-making process of the story. First of all they reach a wall and confront red haired giants with beards and have to hide for their lives. Then in the darkness of the night they meet another black giant and give him money to help them cross the border. The family is represented as Lilliputians who are at the mercy of the giants. They come to an ocean and know that they have to cross it. Here they have other “terrible and dangerous monsters that hide beneath our boat, ready to gobble us up if the boat capsizes!” trying to pull them into the water. They do manage to make landfall and the children ask, “Is this the place we will be safe?” They make it to a train and cross many borders, observing birds flying above them and enviously thinking of their journey and the lack of borders restricting the birds, “I hope, one day, like these birds, we will find a new home. A home where we can be safe and begin our story again.” Thus this story concludes in a realistic manner, as there are a myriad of refugees who never find a “home” and spend their whole lives in either refugee camps or in an effort to reach one.

Sanna felt deeply about this issue, and says, “The Journey is actually a story about many journeys, and it began with the story of two girls I met in a refugee center in Italy. After meeting them I realized that behind their journey lay something very powerful. So I began collecting more stories of migration and interviewing many people from many different countries. A few months later, in September 2014, when I started studying a Master of Arts in Illustration at the Academy of Lucerne, I knew I wanted to create a book about these true stories. Almost every day on the news we hear the terms ‘migrants’ and ‘refugees’ but we rarely ever speak to or hear the personal journeys that they have had to take. This book is a collage of all those personal stories and the incredible strength of the people within them.”

The Journey is Sanna’s first picture book. Francesca Sanna is Italian and is an illustrator and graphic designer who moved to Switzerland to follow her dream to work as an illustrator. She graduated in 2015 from the Lucerne School of Art and Design with a Master of Design focused on Illustration. This book was selected for a number of awards including the 2017 USBBY Outstanding International Book List; a Notable New York Times Children’s Book for 2016; and Kirkus Reviews Best Picture Books of 2016.