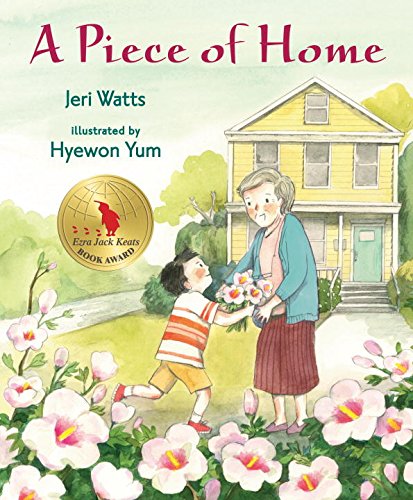 This picturebook is about a Korean boy, Hee Jun, who emigrates from South Korea to West Virginia, in the United States. After having a difficult time, Hee Jun and his family begin to adjust to a new community, build friendships, and develop a sense of belonging while upholding and sharing their Korean traditions. The book is written by Jeri Watts with the hope that immigrant children will be able to “find a piece of home in their new surroundings” (book jacket). Hyewon Yum’s delightful watercolor illustrations arouse positive emotions in readers through detailed pictures. These images highlight the differences in lifestyles between people living in South Korea and the United States, such as different furniture, food, utensils, and languages (inside speech bubbles). These images help young readers see that Hee Jun and his family are experiencing big changes in their lives.

A Piece of Home supports readers in having a better understanding of the experiences of immigration. While Hee Jun used to feel “ordinary” in South Korea, he notices that he is neither physically nor linguistically ordinary in his new home. He feels frustrated and disconnected from school as he is not able to understand what others say and no one understands what he says in Korean. From this portrayal, children can develop empathy for peers who are confronted with these new experiences. The story also describes how Hee Jun’s grandmother feels lost after moving and how his sister struggles to adjust to her school. Hee Jun describes his grandmother as holding herself tall and proud when she was a highly-respected school teacher in South Korea, but since she became a stay-at-home grandmother in West Virginia her shoulders are slumped and tired. By including the stories of Hee Jun’s family members, readers can extend their understanding and empathy beyond an individual child to encompass the entire immigrant family.

Moreover, the story allows readers to see the positive effects of welcoming immigrants into their communities. Hee Jun’s family contributes to the community at the same time they are supported by several community members. Hee Jun’s father works at a law school in West Virginia. His grandmother shares her knowledge about teaching with her granddaughter’s teacher. These depictions help readers recognize how immigrants’ skills and knowledge benefit society, rather than perceiving them as a threat.

This book also recognizes and validates immigrant children’s feelings and life challenges. Although the story portrays immigrant children as different in some ways, these differences are not portrayed from a deficit perspective. Children’s books often portray characteristics of immigrant children as having English accents or different physical appearances that make them targets for bullying. These types of storylines may make children with these characteristics feel vulnerable. A Piece of Home focuses on the children’s and family’s strategies to adapt and overcome the challenges, rather than on situations around bullying due to cultural differences.

Finally, this story describes how Hee Jun’s family is adjusting to a new cultural community, while staying together as a family and upholding their Korean traditions. When Hee Jun visits his friend’s house, he finds a Rose of Sharon, the Korean national flower called Muhunghwa, which he used to have in his garden in Korea. His friend’s mother gives him a tender shoot and it eventually takes root in the ground and blooms in Hee Jun’s new garden. In the last scene, Hee Jun invites his friend home and his grandmother introduces a Korean tradition to her new teacher friend. This scene could represent how Hee Jun’s family members expand their identities and develop a sense of belonging within their new community. This also could be an opportunity for readers to think about the importance of maintaining family’s cultural practices and languages in a new country.

Books that could be paired with A Piece of Home include: Here I Am written by Patti Kim (2015), The Quiet Place written by Sarah Stewart (2012), and The Seeds of Friendship written by Michael Foreman (2015). In Here I Am, immigrant children see a boy making friends and discovering joy in a new city. The Quiet Place depicts Isabel’s family’s growth after immigrating to the United States and maintaining connections with an aunt in Mexico. The Seeds of Friendship conveys a message of acceptance, portraying a supportive atmosphere for immigrant children through a common goal around building gardens all over the city. These books can support immigrant children in their adjustment to a new society, while also encouraging all readers to understand and appreciate the strengths and knowledge of immigrant children and families.

Jeri Watts is an American author known for her book Kizzy Ann Stamps and A Piece of Home, which won the 2017 Ezra Jack Keats New Writer Awards. She lives in Virginia and teaches at Lynchburg College. Hyewon Yum is the author and illustrator of several children’s books, including Mom, It Is My First Day of Kindergarten! This book received the Ezra Jack Keats New Illustrator Award. She lives in New York.