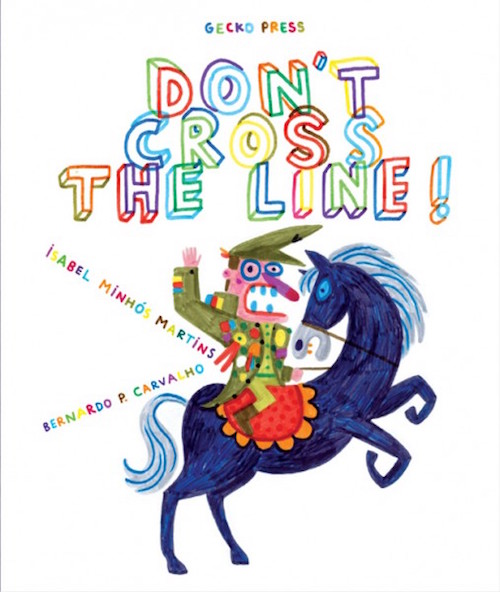 The story begins with colorful, almost whimsical illustrations on the title page with an implied commander shouting from his horse to a guard, “This is how it’s going to be. I give the orders around here!” A turn of the page reveals the guard standing to the left side of the book gutter with only a small dog entering the picture from the top left and nothing at all on the facing right side page. Another page turn reveals a man entering the left page to whom the guard shouts “stop” as the man approaches on yet a succeeding page. For eight double page spreads, the right-hand page is totally empty as various people approach the guard, revealing in speech bubbles many reasons they need to cross to the right side of the book. When a ball belonging to children rolls to the other side, the guard gives permission for the boys to retrieve the ball, and this opens the way for others to gain permission to cross. The guard, who doesn’t seem to have real reasons for why people cannot cross, asks them not to tell who let them through, although ultimately the commander reappears and gives orders to arrest the guard. The many people now on the right side of the page rescue him while shouting a variety of insults to the commander that lead to cheers as they rush away with the guard. Outraged by the litter on the pages, the commander decides to leave the book.

Dictatorship with a peaceful resolution, political commentary, questioning of authority, an immigration story—what might this postmodern book from Portugal imply? Perhaps this is in the readers’ mind; however, it requires serious thought around simple, comical figures with large noses and limited text found only in the characters’ speech bubbles. These characters are identified on the end pages and can be followed throughout the story, in a way reflecting the community. Whether one finds a more allegorical meaning or just notices themes of borders, working together, or questioning rules that do not seem just, Don’t Cross the Line! provides opportunities for both critical and creative thinking through illustrative techniques that speak to the universality of issues.

Isabel Minhó Martins and Benardo P. Carvalno are both artists from Portugal who co-founded the publishing company Planeta Tangerina. They have received awards for design and illustration of picture books as well as their publishing company (best European publisher in 2013 at the Bologna Book Fair). Further information about them, their company, and their books can be found at planetatangerina.com/en.

With so many possibilities of response, Don’t Cross the Line! can be a useful addition to a number of text sets for all ages on themes of questioning authority, immigration, or bullying. Paired with Two White Rabbits (Jairo Buitrago, 2015), the theme of immigration and borders can be discussed. Paired with Sit-In (Andrea Pinkney, 2010), peaceful protests or questioning rules or authority can be explored. The Composition (Antonio Skarmeta, 2003) can be paired for a discussion around dictatorships.