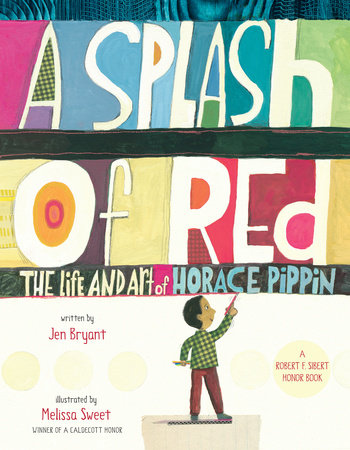 Horace Pippin loved to draw pictures. This story by Jan Bryant recounts the life and experiences of Horace Pippin. A Splash of Red traces Horace Pippin’s life from his early years as a child with a passion for art to his entrance in the 1940s into the American art world. Through colorful, primitive folk style illustrations and text, Bryant and illustrator Melissa Sweet chronicle Horace’s life as an artist. Horace drew from childhood. As a teenager, he dropped out of school to help support his family but never abandoned drawing. Horace was drafted during WWI and, while away at war, continued drawing in the trenches until wounded. Horace lost the use of his right arm and hand during the war and learned to use his left hand to assist his right hand to draw when he returned home. Horace Pippin created paintings of African-American life, Bible stories, and images of war and emancipation. Horace was self-taught and had to overcome poverty, racism, and a disability to become an American master of primitive folk art.

This excellent nonfiction book tells the story of a unique individual worth knowing. The book has a deceptively low lexile level of 610 and can be a read aloud for kindergarten through second grade and enjoyed independently from third grade upward. There are multiple types of text throughout the story and at times there are several longer passages. The book is visually engaging though simultaneously visually demanding.

This biography can be paired with other biographies to illustrate various writing styles and structures of biographies. A biography in particular that is a good pairing is one of another American Artist, Georgia O’Keefe, also by Jen Bryant titled Georgia’s Bones (2010). A second pairing, is the biography Art from Her Heart: Folk Artist Clementine Hunter (2008) by Kathy Whitehead and illustrated by Shane Evans. Both Horace and Clementine are self-taught African American folk artists who overcame aspects of racism as well as other obstacles to succeed with their artistic endeavors.

Jen Bryant writes picturebooks, novels, and poems. A Splash of Red won the ALA Schneider Family Book Award for ages 0-10 and the Orbis Pictus award, named a Sibert Honor Book, received four starred reviews, and is a Junior Library Guild Selection. Jen has a BA and an honorary Doctorate from Gettysburg College and a MA from Arcadia University. She taught writing and Children’s Literature at West Chester University and Bryn Mawr College and gives school and public lectures throughout the year. She lives with her family in Chester County, Pennsylvania.

Melissa Sweet is an illustrator and writer of children’s books. She won several awards for her illustrations, particularly for the three books she illustrated in collaboration with Jen Bryant. Melissa illustrated several nonfiction stories about real people. When she researches an individual, she travels with a camera, sketchbook, pens, and pencils. She believes that it is more important to “soak up” what she sees rather than worrying about recording it. The holistic impression she gains from a place or primary source material inspires her and is as important as any particular detail. She states, “sometimes an image, a phrase, or a color palette” is the starting point of the book or can inspire the entire book. She always reads a good deal before she conducts primary research and even more when she completes her initial research. Melissa keeps an archive for each project starting with a new sketchbook, which becomes somewhat of a catch all from jotting notes, to keeping a magazine image, to “writing with lipstick on a paper bag while driving.” Melissa states that it is important for her to engage in a haphazard process for her to be creative.