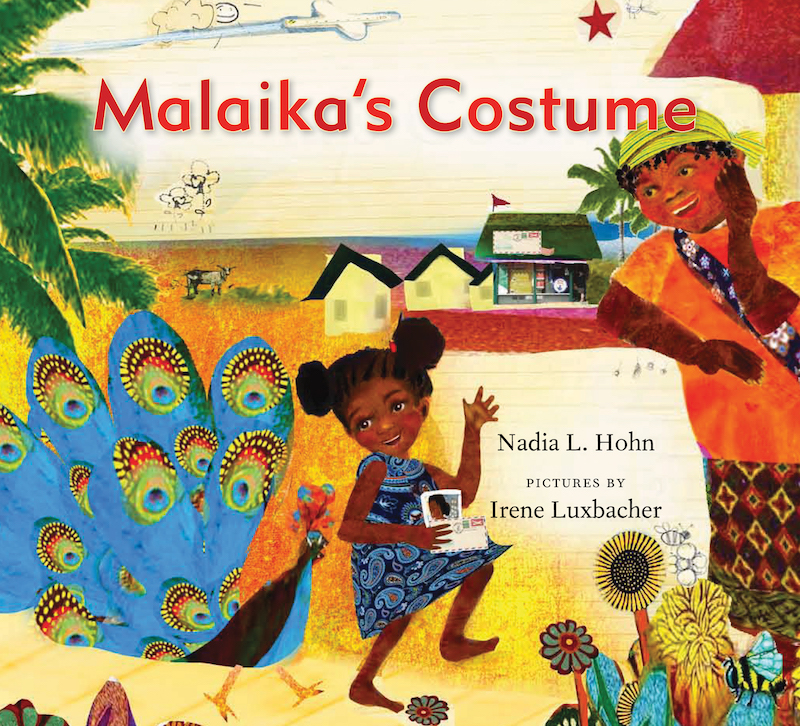 Malaika’s Costume begins with a young girl’s dream to march in the Carnival parade in a colorful winged peacock costume, saying “I close my eyes and dance. I am a beautiful peacock.” There’s a sweetness in the way Malaika’s caregiver grandmother sees herself in her granddaughter’s free spirit that is longing to emerge.

Malaika’s mummy (her term of endearment for her mother) left their Caribbean island home for Canada where she seeks a good job and a “better way of life” for Malaika and Grandma. This far-away place with unfamiliar weather and customs is a mystery to Malaika. “The snow look like coconut sky juice. She says that children play in it and build man with it. What a sticky mess!” While she waits for a letter from her mother with the promised money for a costume, the children in Malaika’s neighborhood prepare their costumes based on Carnival characters like Job Molassie, Moko Jumbies, and Pierrot. (On the verso of the title page, the author provides a glossary of the Caribbean terms used in the story.) In an effort to help, Grandma offers a costume she wore when she was a girl. Malaika hurts Grandma’s feelings by calling the costume “tired,” “dusty,” and a “tear-up old thing.” Malaika runs away, but stops when she hears a neighbor playing one of Grandma’s favorite kaiso songs. “It is true we are poor but we have dignity.” Malaika becomes more determined to not give up on her dream. She solves her problem by asking Ms. Chin, the tailor lady, for scraps of cloth.

After apologizing for her unkind words, Malaika shows Grandma the bag of bright pieces of cloth. The girl notices that Grandma had cleaned up her childhood costume and sprinkled it with baby powder. Together, they start with Grandma’s costume and add buttons and the colorful cloth: red chiffon, blue silk, jade, purple ribbon. They fashion a head piece and a peacock costume complete with feathers and wings. Malaika proclaims, “The costume fit me, and I shine from head to toe.” Grandma takes a photograph to put in the mail to Mummy. Then Malaika joins the bouncing and dancing in the streets of the Kiddie Carnival. The final wordless page of the book shows Malaika’s teary-eyed mother holding a card with the photograph of her proud daughter in her peacock costume.

This story is infused with Caribbean cultural markers–food, clothing, and festivals–as well as patois English narration and dialogue. Written in the first person, author Nadia Hohn invites readers to experience Malaika’s life–to share her hopes, sorrows, resilience, creativity, and her exuberance. The precise island on which the story takes place is not mentioned. The kaiso music, originating in West Africa and evolved into calypso, is common on many Caribbean islands. One could infer that the story takes place in Jamaica since Malaika remarks on the cassava chips and jelly coconut Menelik the Rastaman sells and the author’s parents were born in Jamaica.

Capturing the colors of the Caribbean, illustrator Irene Luxbacher vividly depicts the cultural context of Malaika’s story. With mixed media, graphite, and oils on paper, her paintings communicate dance and music–the movement and sounds that emanate throughout this island community. Irene Luxbacher effectively portrays the feelings of Malaika, her family, and her neighbors through the emotional vicissitudes of the story. She adds pencil doodles around the printed text, which is presented on lined paper furthering the letter-writing aspect of the story.

Malaika’s Costume could be paired with books that show children and their grandparents interacting in creative and supportive ways. Because… (Baryshnikov and Radunsky, 2007) and My Abuelita (Johnston and Morales, 2009) are two favorites, both about grandmothers. A Family Is a Family Is a Family written by Sara O’Leary and illustrated by Qin Leng (2016) is another possible pairing. This picturebook depicts the various responses of first-grade children when their teacher asks them to draw their families. One child, a member of a large family with many foster children, worries that her family is “too” different. Each of her classmates’ drawings depicts a family different in some way from other students. Like Malaika’s Costume, this book is also on the USBBY 2017 Outstanding International Book List.

Like Malaika, Saya, the child in Mama’s Nightingale: A Story of Immigration and Separation by Edwidge Danticat and illustrated by Leslie Staub (2016), is also separated from her mother. Saya’s Haitian undocumented immigrant mother is being held in a U.S. detention center. During weekly visits, Saya’s mother tells her daughter stories of the nightingale, or wosiyòl. Later, her mother mails Saya cassette tapes with stories she has recorded. These “conversations” with her mother give the young girl hope and make her feel less sad and lonely. When Saya writes her own story, her father sends it to a newspaper reporter. The publicity helps secure freedom for Saya’s mother.

Nadia Hohn, the author of Malaika’s Costume, is Toronto-born with Jamaican parents. She is a writer of “colourful realism in non-fiction, middle-grade, picture book, young adult, and book reviews about carnivals, music, media, diversity, and make-believe.” She is also an activist who supports the essential voice of cultural insider authors and illustrators.

In 2014, before the book was published, Hohn won the Helen Issobel Sissons Children’s Book Award for the manuscript of “Malaika’s Costume.” The book is on the USBBY 2017 Outstanding International Book List and earned recognition as the 2016 Ontario Library Association Best Bets, 2017 Notable Children’s Books Discussion Titles by the Association for Library Service to Children, and a 2016 Canadian Children’s Book Centre Best Picture Book of exceptional caliber. A French translation, Le costume de Malaika, was published by Scholastic Canada this spring. Malaika’s Winter Carnival, the sequel to Malaika’s Costume, was published in fall 2017.

Canadian artist, author, and illustrator Irene Luxbacher has written or illustrated three picturebooks to date. You can visit her Web site at: ireneluxbacher.com.