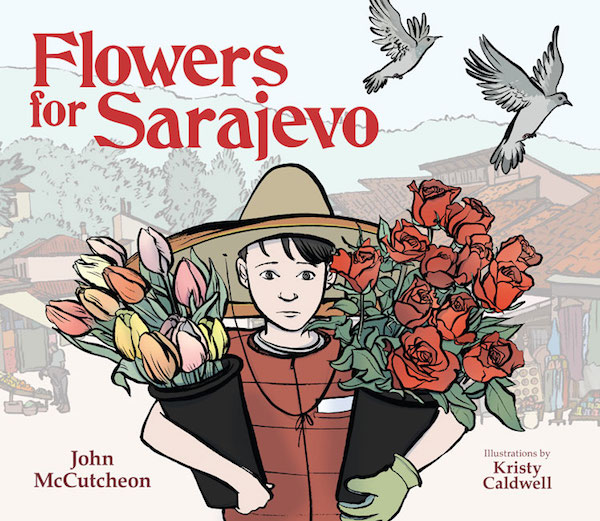 The Balkan wars of the 1990s reflected ongoing ethnic conflicts between Croatians, Bosnians, and Serbians that led several republics to declare their independence from Yugoslavia. Sarajevo, the largest city in Bosnia and Herzegovina, had for centuries been a crossroads of cultures, nationalities, and religions, and so was frequently the site of attacks and military offensives. On May 27, 1992, an early morning mortar attack by Bosnian Serb groups targeted one of the last remaining bakeries in Sarajevo, killing twenty-two people waiting in line. The next morning, at the exact time of the attack, a cellist from the Sarajevo Opera Orchestra, Vedran Smailovic, stepped out into the square directly across from the bakery and began playing. For twenty-two days, Smailovic played the same tune, Ablinoni’s Adagio in G Minor, to give tribute to the twenty-two lives. His act of brave resistance lifted the spirits of the people of Sarajevo.

John McCutcheon, an author, songwriter, and singer, wrote a song, “Streets of Sarajevo,” to honor the bravery of Smailovic. Ten years later, he found the song buried in his files, and was encouraged by Margaret Quinlin at Peachtree Publishers to use the song as the basis for a picturebook. Since children were the audience for the book, he did not want to make the book about Smailovic, even though he was inspired by his actions. “I wanted to set up another hero who kids could identify with. Though they might be inspired by this brave musician, most readers probably couldn’t imagine doing what he did after the bombing. But every single day, kids can do something nice for someone else or stand up to a bully. Kids are capable of heroic acts, no matter how small” (Lodge, 2017).

This picturebook is a fictionalized account of the incident through the eyes of young boy, Drasko, who takes over the family flower stall when his father is called to the battlefield. He witnesses the bombing as well as the actions of the cellist who goes to the crater to play the most beautiful music Drasko has ever heard. Drasko had marveled at the way his father always had a kind word (and occasional free flower) for everyone regardless of religion or race, scowl, or smile. The cellist’s simple defiant act of beauty inspires Drasko to feel a small thread of hope and to offer a smile and a free flower to others. McCutcheon chooses not to identify Drasko’s ethnicity or religion, instead emphasizing that “Serb and Croat, Muslim and Christian” are all affected by the violence.

Caldwell outlines the figures with a thick line, creating deeply expressive illustrations, rendered in ink, charcoal, graphite pencil, and Adobe Photoshop. She illustrates the bombing in a somber and scary tone without the scene becoming gruesome. Key moments are depicted in framed foregrounds with faded and smudged backgrounds and the use of deep rich colors to draw the reader’s eye to the roses or violin in the framed insets.

In addition to the powerful visual images, the book comes with a CD that brings music into the story. The recording includes the original song by McCutcheon as well as Adagio in G Minor. The book includes historical notes on the war, an author’s note about McCutcheon’s interest in this story, the lyrics for the song, and a biographical profile of Vedran Smailovic.

This picturebook reflects multiple collaborations, including McCutcheon’s work with editors at Peachtree and with the illustrator and the cellist. McCutcheon visited Smailovic in Ireland, where he now lives, because he did not want to go forward with the book without his permission. That contact led to the cellist recording a solo performance of the historical adagio for the CD and accompanying McCutcheon on his recording of his song about the streets of Sarajevo. McCutcheon also reached out personally to Caldwell, visiting her in her home. The vision for this book was created collaboratively across everyone involved in the project.

Flowers for Sarajevo is Caldwell’s first book and she drew creative energy from her discussions with editors at Peachtree as well as her own community in Queens, whose ethnic composition resembles Drasko’s Sarajevo neighborhood with many people originally from Serbia, Croatia, and Bosnia. Caldwell also visited a cellist, asking him to play and taking many photos, later sending the cellist sketches to be sure she had details correct such as the hands on the instrument and the way the cello is carried (Lodge, 2017).

This powerful story about the healing power of music and the beauty that rises from violence can be paired with other picturebooks reflecting these themes, such as The Cello of Mr. O by Jane Cutler and Greg Couch (1999), A Child’s Garden by Michael Foreman (2009), and Silent Music by James Rumford (2008). Another excellent pairing is Zlata’s Diary by Zlata Filipovic (1994) about her life growing up during the civil war in Sarajevo. Resistance is a theme to explore for pairings with biographies of musicians, such as John’s Secret Dreams: The Life of John Lennon by Doreen Rappaport and Bryan Collier (2016) and Stand Up and Sing! Pete Seeger, Folk Music and the Path to Justice by Susanna Reich and Adam Gustavson (2017).  Acts of resistance and caring in face of violence and oppression could be highlighted by pairing this book with The Rooster Who Would Not Be Quiet! by Carmen Agra Deedy and Eugene Yelchin (2017), Rose Blanche by Roberto Innocenti (1985), and Fish for Jimmy by Katie Yasakaki (2013).

McCutcheon is a highly-regarded performer, songwriter, and musician, with thirty-eight albums that have garnered six Grammy nominations. He is the author of the picturebook Christmas in the Trenches (2006) and lives in Smoke Rise, Georgia with his wife, Carmen Agra Deedy. In his author’s note McCutcheon provides two powerful quotes. One is the response of Smailovic to a soldier after one of his performances, who asked, “Why are you playing where there is bombing?” In a voice of hope and defiance, the cellist replied, “Why are you bombing where I am playing?” McCutcheon ends with a quote from Leonard Bernstein, “This will be our reply to violence: to make music more intensely, more beautifully, more devotedly than ever before.”