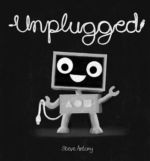 Meet Blip. Blip loves being plugged into her computer. When a blackout occurs, Blip trips over her wire and tumbles outside.

In the early nineteenth century lived Ada Byron: a young girl with a wild and wonderful imagination. The daughter of internationally acclaimed poet Lord Byron, Ada was tutored in science and mathematics from a very early age. But Ada’s imagination was never meant to be tamed and, armed with the fundamentals of math and engineering, she came into her own as a woman of ideas―equal parts mathematician and philosopher. From her whimsical beginnings as a gifted child to her most sophisticated notes on Charles Babbage’s Analytical Engine, this book celebrates the woman recognized today as the first computer programmer.

A biography of the British noblewoman whose additions to her translation of an account of Charles Babbage’s calculating machine became the first computer program.

It is, perhaps, the perfect video game. Simple yet addictive, Tetris delivers an irresistible, unending puzzle that has players hooked. Play it long enough and you’ll see those brightly colored geometric shapes everywhere. You’ll see them in your dreams. Alexey Pajitnov had big ideas about games. In 1984, he created Tetris in his spare time while developing software for the Soviet government. Once Tetris emerged from behind the Iron Curtain, it was an instant hit. Nintendo, Atari, Sega―game developers big and small all wanted Tetris. A bidding war was sparked, followed by clandestine trips to Moscow, backroom deals, innumerable miscommunications, and outright theft. In this graphic novel, New York Times–bestselling author Box Brown untangles this complex history and delves deep into the role games play in art, culture, and commerce. For the first time and in unparalleled detail, Tetris: The Games People Play tells the true story of the world’s most popular video game.

A fascinating look at Ada Lovelace, the pioneering computer programmer and the daughter of the poet Lord Byron.

Noor has lived all of her fourteen years in the fifteen lanes of Mumbai’s red light district. Born into a brothel, she is destined for the same fate as her mother: a desperate life trapped in the city’s sex trade. She must act soon to have any chance of escaping this grim future.

Across the sprawling city, fifteen-year-old Grace enjoys a life of privilege. Her father, the CEO of one of India’s largest international banks, has brought his family to Mumbai where they live in unparalleled luxury. But Grace’s seemingly perfect life is shattered when she becomes a victim of a cruel online attack.

Ada Lovelace (1815–1852) was the daughter of Lord Byron, a poet, and Anna Isabella Milbanke, a mathematician. Her parents separated when she was young, and her mother insisted on a logic-focused education, rejecting Byron’s “mad” love of poetry. But Ada remained fascinated with her father and considered mathematics “poetical science.” Via her friendship with inventor Charles Babbage, she became involved in “programming” his Analytical Engine, a precursor to the computer, thus becoming the world’s first computer programmer.

Twelve-year-old Johnny endures tensions between his parents, watches television coverage of the Gulf War, and plays a computer game called Only You Can Save Mankind, in which he is increasingly drawn into the reality of the alien ScreeWee.

In a world whose seasons are defined by Christmas sales and Spring Fashions, hundreds of tiny nomes live in the corners and crannies of a human-run department store. They have made their homes beneath the floorboards for generations and no longer remember, or even believe in, life beyond the Store walls. Until the day a small band of nomes arrives at the Store from the Outside.