When Mr. Squirrel wakes up to discover that the moon is resting on his tree, he becomes desperate to return the moon to the sky before he is accused of stealing it.

A year after Stephie Steiner and her younger sister, Nellie, left Nazi-occupied Vienna, Stephie has finally adapted to life on the rugged Swedish island where she now lives. But more change awaits Stephie: her foster parents have allowed her to enroll in school on the mainland, in Goteberg. Stephie is eager to go. Not only will she be pursuing her studies, she’ll be living in a cultured city again—under the same roof as Sven, the son of the lodgers who rented her foster parents’ cottage for the summer.Five years her senior, Sven dazzles Stephie with his charm, his talk of equality, and his anti-Hitler sentiments. Stephie can’t help herself—she’s falling in love. As she navigates a sea of new emotions, she also grapples with what it means to be beholden to others, with her constant worry about what her parents are enduring back in Vienna, and with the menacing spread of Nazi ideology, even in Sweden. In these troubled times, her true friends, Stephie discovers, are the ones she least expected.

Big Wolf has always lived alone at the top of a hill under a tree, so when a little wolf suddenly arrives one day, he does not know what to think. Everytime, he turns around, there is little wolf, until one day he is missing and Big Wolf gets worried.

It’s the worry you hadn’t even thought to worry about that should worry you the most. At least that’s how it looks to Clarice Bean, who has been writing her worries in a notebook — things like Worry no. 1: infinity, or Worry no. 3: change. And now that her worst never-imagined worry has happened — her utterly best friend is moving away forever — Clarice doesn’t even care about her tickets to the Ruby Redfort, girl detective, movie premiere. That is, unless something happens to change things again. . . . Lauren Child’s trademark wit combines with spot-on insight in this hugely engaging story about childhood worries, unwanted changes, and finding friendships in the most surprising places.

As Ophelia rushes to comfort her friend Kevin, who is suffering from butterflies in the stomach, she meets up with various friends who misunderstand the problem, each one adding a new ailment and cure to the growing list. 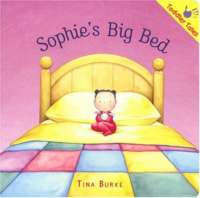 Sophie is a big girl now, with a nice, new big-girl bed. But Bunny, Bear, and Scarlett are worried that if the bed is too big, they may get lost under all those sheets and blankets.