Serving a sentence in a prison in Mexico, Libertad González finds a clever way to pass the time with the weekly Library Club, reading to her fellow inmates from whatever books she can find in the prison’s meager supply. The story that emerges, though, has nothing to do with the words printed on the pages. She tells of a former literature professor and fugitive of the Mexican government who reinvents himself as a trucker in the United States.

Fifteen brief folktales in which there is a mystery or problem that the reader is invited to solve before the resolution is presented. 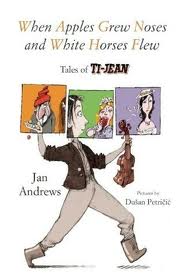 In these three imaginative stories, Jan Andrews introduces us to Quebec’s traditional folktale hero, Ti-Jean. He’s an endearing character who is both wise and foolish, and though he does find himself in hard situations (often of his own making), in the end, he somehow manages to do what needs to be done. In “Ti-Jean and the Princess of Tomboso” he eventually outwits a greedy princess; in “Ti-Jean the Marble Player” he gets the best of a pint-sized scoundrel; and in “How Ti-Jean Became a Fiddler” he turns the tables on a too-clever-for-her-own-good seigneur’s daughter, and finds true love in the process. 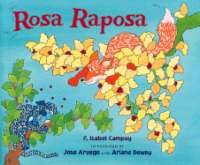 A willy fox outwits Jaguar in three trickster tales set in the jungles of South America.

With the help of a blue crane, a mother dove rescues her babies from a not-so-clever jackal.

To keep from being eaten, an inchworm measures a robin’s tail, a flamingo’s neck, a toucan’s beak, a heron’s legs, and a nightingale’s song.

As a refugee from Sudan to the United States, Sangoel is frustrated that no one can pronounce his name correctly until he finds a clever way to solve the problem.

Read more about My Name Is Sangoel in WOW Review.