When Zezé grows up, he wants to be a poet in a bow tie. For now the precocious young boy entertains himself by playing clever pranks on the residents of his Rio de Janeiro neighborhood, stunts for which his parents and siblings punish him severely. Lately, with his father out of work, the beatings have become harsher. Zezé’s only solace comes from his time at school, his hours secretly spent singing with a street musician, and the refuge he finds with his precious magical orange tree. When Zezé finally makes a real friend, his life begins to change, opening him up to human tenderness but also wrenching sorrow. Never out of print in Brazil since it was first published in 1968, My Sweet Orange Tree, inspired by the author’s own childhood, has been translated into many languages and has won the hearts of millions of young readers across the globe.

From the time she was a little girl, Nia has dreamed up adventures about the Javanese mythical princess, Dewi Kadita. Now fourteen, Nia would love nothing more than to continue her education and become a writer. But high school costs too much. Her father sells banana fritters at the train station, but too much of his earnings go toward his drinking habit. Too often Nia is left alone to take over the food cart as well as care for her brother and their home in the Jakarta slums.

In Pakistan, Amal holds onto her dream of being a teacher even after becoming an indentured servant to pay off her family’s debt to the wealthy and corrupt Khan family.

Life wasn’t always this hard for 14-year-old Mvelo. There were good times living with her mother and her mother’s boyfriend. Now her mother is dying of AIDS and what happened to Mvelo is the elephant in the room, despite its growing presence in their small shack. In this Shakespeare-style comedy, the things that seem to be are only a façade and the things that are revealed hand Mvelo a golden opportunity to change her fate. We Kiss Them With Rain explores both humor and tragedy in this modern-day fairy tale set in a squatter camp outside of Durban, South Africa.

Modern history unearthed as a boy becomes an innocent victim of corruption in Bolivia’s crime world, where the power of family is both a prison and a means of survival.

Caleb has spent his life roaming southern England with his Pa, little to their names but his father’s signet ring and a puppet theater for popular, raunchy Punch and Judy shows — until the day Pa is convicted of a theft he didn’t commit and sentenced to transportation to the colonies in America. From prison, Caleb’s father sends him to the coast to find an aunt Caleb never knew he had. His aunt welcomes him into her home, but her neighbors see only Caleb’s dark skin. Still, Caleb slowly falls into a strange rhythm in his new life . . . until one morning he finds a body washed up on the shore. The face is unrecognizable after its time at sea, but the signet ring is unmistakable: it can only be Caleb’s father. Mystery piles on mystery as both church and state deny what Caleb knows. 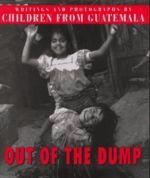 A compilation of poems with photographs by children who live in the municipal dump in Guatemala City.

A steamship makes a journey across time from luxury and exclusivity, industry and abandonment, to stewardship and inclusion as we see the evolving functions of the ship and the changing faces of the people who cherish it most

In this novel for teens, Matt and Free meet in Paris where they both play American football on a team in a poverty-stricken suburb where racial tension affects the team.