Armando and his father are trash-pickers in Tijuana, Mexico, but when Senor David brings his “school”–a blue tarp set down near the garbage dump–to their neighborhood, Armando’s father decides that he must attend classes and learn. Based on a true story.

Mel and her mother, Cecily, know what it’s like to live rough, whether it’s on the streets or in the apartment of an abusive man.When Cecily announces that they’ve had enough and that they are going to go home to her mother’s, Mel dreams of security, a comfortable bed, and a grandmother’s love seem to be about to come true. But some mistakes cannot be easily forgiven or erased. Her grandmother is not what Mel expects, and though the local library offers sanctuary, a real home seems beyond her grasp. Mel’s determination to rise above what fate has dealt is about to change that. Cyndi Sand-Eveland’s work with homeless youth gives her characters an authenticity no reader will forget. Ultimately, a story of hope and acceptance, A Tinfoil Sky is a powerful, can’t-putit- down novel. 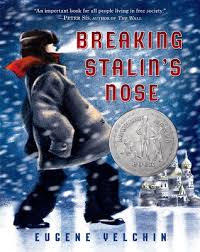 In the Stalinist era of the Soviet Union, 10-year-old Sasha idolizes his father, a devoted Communist, but when police take his father away and leave Sasha homeless, he is forced to examine his own perceptions, values and beliefs.

The international award-winning story of two girls from different backgrounds, united in friendship Parisian teenager Lou has an IQ of 160, OCD tendencies, and a mother who has suffered from depression for years. But Lou is about to change her life—and that of her parents—all because of a school project about homeless teens. While doing research, Lou meets No, a teenage girl living on the streets. As their friendship grows, Lou bravely asks her parents if No can live with them, and is astonished when they agree. No’s presence forces Lou’s family to come to terms with a secret tragedy. But can this shaky, newfound family continue to live together when No’s own past comes back to haunt her? Winner of the prestigious Booksellers’ Prize in France, No and Me is a timely and thought-provoking novel about homelessness that has far-reaching appeal.

With honesty and rare grace, award-winning author Francisco Jiménez shares his most poignant Christmas memory in this remarkable book. Illustrated with paintings full of strength and warmth, written in spare bilingual text, this simple story celebrates the true spirit of Christmas, and illuminates how children do indeed draw strength from the bonds of their families.

Eleven-year-old Gregory and his family had to leave the Navajo reservation at Bird Springs—the only home they’ve ever known—and move to a motel in Tucson, Arizona. Gregory misses his absent father, but he likes school, particularly art class with the kind teacher. He also makes a new friend, Matt, who promptly informs him art class is really art therapy and that Gregory is staying in a shelter, not a motel. Even though Matt can be outspoken, he’s just what Gregory needs now. He’s honest and generous with his allowance so they can ride the Ferris wheel at the carnival. Award-winning author Carolyn Marsden paints a poignant story of a little boy who, as he confronts the more painful aspects of his past, is filled with a sense of hope. 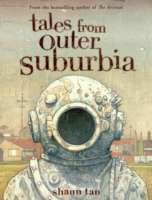 These are the odd details of everyday suburban life that might forever go unnoticed, were they not finally brought to light by Shaun Tan.

A raw, poignant story of a band of Brazilian street kids who survive — if they can — by their wits alone. Asphalt Angels centers around a boy named Alex, a street child of 13 in Brazil who has been kicked onto the city streets by his stepfather after his mother dies. He is alone and scared. This is the story of how he adapts to life in the streets with a group of other children. Hazards are everywhere: drug-dealing, theft, glue-sniffing, harassment, brutality, even murder. It is not easy steering clear of them, yet Alex manages to survive, eventually making a home with 14 other boys in a house, working in an office, and attending evening school. This story grew from the real-life drama the author observed while on assignment. In an afterword, she reports that some 10,000 children sleep in Rio’s streets, and many more roam them by day, victims of inadequate nutrition, education, and shelter, and prey to drugs and violence. Alex does exist, but under another name.

In a deserted countryside of the future, Ren, a young girl whose mother has abandoned her, and three other children discover a baby whom they name Found, and they join together to fight for survival.

Smart and independent, 11-year-old Khyber lives with her mom, Tammy, a former stripper, and her autistic twin brothers in a poor Toronto neighborhood. Though she doesn’t have a lot in common with her classmates, Khyber does have wonderfully eccentric friends: Valerie, Toronto’s meanest waitress, and X, a homeless woman in hiding from “the secret police.” Despite having to deal with pompous social workers who make her mother cry and ignorant kids who make remarks about her brothers, Khyber manages to enjoy herself, poring over atlases, planning exotic journeys, and taking peanut butter sandwiches to X. But when Tammy decides to move her sons to a group home for proper care, Khyber’s world starts to crumble. She fights with her mom and then gets expelled from school. To make matters worse, X suddenly disappears. Khyber sets out to find her in a wild all-night odyssey of self-discovery.