Teenagers from Guatemala describe why they left that country and how they have adjusted to life in their new homeland.

Before coming to Canada, while he was still an art teacher in Beijing, Song Nan Zhang traveled from Inner Mongolia east, south, and north to find and paint unusual scenes of Chinese family life.Here are the children who grow up in the saddle with their nomadic parents or become as agile as the mountain goats they tend. A boy plays chess on the ground with his shepherd grandfather. A teenager tends her father’s pottery shop. At festivals a child plays hide-and-seek, behind yellow parasols, and stilt dancers wait to compete.

A Japanese folk tale about the brave daughter of a samurai warrior and her journey to be reunited with her exiled father. When Tokoyo’s father, a samurai nobleman, is sent into exile on a lonely island in a distant sea, his young daughter is determined to join him. Despite her noble birth, Tokoyo has spent much time with the amas, the agile women divers of Japan who harvest shellfish from the sea, and she is strong and brave as any samurai herself. Setting out on her journey to join her father, Tokoyo encounters many terrors and trials, including bandits in the mountains, a ghost ship on the high seas, and finally a monstrous sea serpent. Finally, she reunite with her beloved father.

Winner of the 1995 John Newbery Medal. Thirteen-year-old Salamanca Tree Hill, known as Sal, is traveling from Ohio to Idaho with her grandparents, in search of her mother. Along the way, she tells them the story of Phoebe Winterbottom, who received mysterious messages, met a “potential lunatic,” and whose mother disappeared. Beneath Phoebe’s story is Sal’s story and that of her mother, who left one day for Idaho and has not returned. Sal has less than a week to get to Idaho in time for her mother’s birthday and bring her back. Despite her father’s warning that she is fishing in the air, Sal knows this journey is the only chance she has for reuniting her family.

Miguel and RamÃ³n are in big trouble with their family. The cousins were almost expelled from school for fighting, and just as they’re finishing up their final year in middle school and preparing to enter high school, their grades have dropped. Miguel’s father Rodrigo who, with his wife Connie, has raised RamÃ³n since his father’s tragic death in a car accident has decided the boys need to be punished. So instead of going on the family’s summer vacation to Santa Fe, they’ll stay with their Abuelita Rosa in a remote town in northern Arizona and do chores around her place.Dreading a long, boring month with their grandmother in the middle of nowhere, the boys get started on the extensive list of tasks they are supposed to complete. Cleaning the shed seems like the least disagreeable one, and soon they find something interesting: a two-wheeled Vespa scooter covered with dust and cobwebs. Excited at their find, the boys decide fixing the scooter might enliven their stay. If they can get it to run, they’ll at least be able to get around town.The next morning, though, Miguel and RamÃ³n wake to a quiet house, and they’re shocked to find their grandmother unconscious in her bed. When the ambulance takes her away to the hospital, the boys are left alone and unable to contact Miguel’s parents. Suddenly, the scooter seems to be the only answer to reaching their family, and so the boys gather food, water, sleeping bags, and the small amount of money they have and begin the long trip to New Mexico.Miguel and RamÃ³n quickly learn that traveling across the country isn’t as easy as they had expected. Sharing the road with fast-moving eighteen-wheelers and camping in the cold desert all make for an exhausting trip. But along the way the boys see many wonderful sights including the Grand Canyon and the red rocks of Sedona and meet lots of interesting people: Frank, an old friend of their grandfather’s who helps them get the scooter ready for the trip; Turner, an attentive youth group counselor they meet at the Grand Canyon; and a group of scientists exploring an ancient Native American site. Most importantly, Miguel and RamÃ³n will discover a lot about themselves through their growing independence as emergent young men.

The twins Rich and Jade Chance are once again on the run— but this time, trouble finds them while their father is away on his own mission. After a breathless chase through an amusement park, Jade is taken hostage by a man from Chance’s past who is plotting a dastardly political coup in the Middle East with nuclear weapons as a threat. Worse still, the President of the United States is on his way to the region for a summit meeting. It will take all of the Chance family’s wits and skills to find the bomb and defuse the threat—and time is running out. Executed to perfection, this gripping adventure featuring two regular teens is a seamless addition to Higgins’ masterful young adult series. 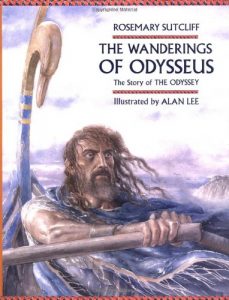 A master storyteller and an award-winning illustrator evoke the golden age of mythical Greece in this spirited retelling of The Odyssey.

Equipped with a backpack full of supplies, Polo sets off on a little boat–and on a series of delightful adventures that take him across (and under) the ocean, to an island and a frozen iceberg, to space and home again, with a world of magical encounters along the way. Polo’s journey is packed with incident and expression.

The classic Brothers Grimm folktale of a king, his son, Iron Hans, and a spell is enriched by impressive illustrations of exotic creatures in exquisite settings.