Susan and her sister, Rebecca, love watching their mother write letters to people in other camps. Their mother has one precious pencil, and she keeps it safe in her box for special things. One afternoon, their mother leaves the iglu to help a neighbour, and Susan, Rebecca, and their brother Peter are left with their father. They play all their regular games but are soon out of things to do―until their father brings out the pencil! As Susan draws and draws, the pencil grows shorter and shorter. What will their mother think when she comes home? Based on author Susan Avingaq’s childhood memories of growing up in an iglu, this charming story introduces young readers to the idea of using things wisely. 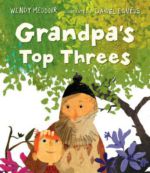 Henry loves talking with Grandpa, but Grandpa has stopped listening. Mom says to just give him time. But Henry wants to talk to Grandpa now. So Henry tries his favorite game: Top Threes. And something amazing happens: Grandpa starts talking again. Out of a tale of favorite sandwiches and zoo animals, outings and trains, emerges a moving story about love, loss, and the wonder of grannies and grandpas.

Rashin is excited about her first visit to the beach in her family’s new home. On the way there, she remembers what beach trips were like in Iran, the beautiful Caspian Sea, the Persian music, and most of all, the saffron ice cream she shared with her best friend, Azadeh. But there are wonderful things in this new place as well a subway train, exciting music and maybe even a new friend!

A young girl delights in a visit to her grandpa’s farm. She and her cousins run through the fields, explore the root cellar where the smoked salmon and jars of fruit are stored, swing on a rope out the barn loft window, visit the appaloosa in the corral and tease the neighbor’s pig. The visit is also an opportunity for this child to ask Grandpa what her grandmother, Yahyah, was like, and explore the “secret room,” with its old wooden box of ribbons, medals and photos of Grandpa in uniform.

Comprised of fun and playfully surprising contemporary illustrations and a satisfying tall tale, Why Dogs Have Wet Noses is a refreshing and memorable take on an old story. Told with dry humor, this is a secular story of how, not long after the world began, it started to rain, and it was the kind of rain that pounds down and never stops. Wise as he was, a man named Noah decided to build a lifeboat, and he set about gathering as many kinds of creatures as he could think of. And he had the good sense to invite slugs, spiders, and the other slimy, creepy-crawly creatures that most people try to get rid of by spraying or stepping on. He also let a funny looking dog with a big soft nose trudge on board all by himself. Had he not done so, the Ark, as you may not know, would definitely have sunk. 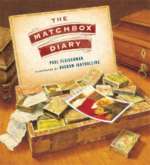 A little girl’s questions about objects in her grandfather’s home prompt a dialogue between grandfather and granddaughter that reveals a story of immigration, family, and the importance of history. An old cigar box holds matchboxes filled with small objects, each one tied to a memory for her grandfather to share.

A tender picture book about loss, love and friendship. As the seasons change, a young boy shares the magic of his garden with a special friend. Here in the Garden is a personal tale from Briony’s life and shows that you can always find your way back to a loved one through your heart and memories.

A toy soldier. A butter dish. A compass. Mundane objects, perhaps, but to the remarkable authors in this collection, artifacts such as these have inspired stories that go to the heart of the human experience of World War I.

When Aref, a third-grader who lives in Muscat, Oman, refuses to pack his suitcase and prepare to move to Michigan, his mother asks for help from his grandfather, his Siddi, who takes Aref around the country, storing up memories he can carry with him to a new home.

Join the discussion of The Turtle of Oman as well as other books centered around relocation on our My Take/Your Take page.

A bilingual collection of poems by a renowned Mexican-American poet revisits and celebrates his childhood memories of fall in the city and growing up in Los Angeles. By the creators of Laughing Tomatoes and Other Spring Poems. 10,000 first printing.