When the entire high school finds out that Hannah Shepard is pregnant via her ex-best friend, she has a full-on meltdown in her backyard. The one witness (besides the rest of the world): Aaron Tyler, a transfer student and the only boy who doesn’t seem to want to get into Hannah’s pants. Confused and scared, Hannah needs someone to be on her side. Wishing to make up for his own past mistakes, Aaron does the unthinkable and offers to pretend to be the father of Hannah’s unborn baby. Even more unbelievable, Hannah hears herself saying “yes.” Told in alternating perspectives between Hannah and Aaron, Trouble is the story of two teenagers helping each other to move forward in the wake of tragedy and devastating choices. As you read about their year of loss, regret, and hope, you’ll remember your first, real best friend—and how they were like a first love.

When Osamu, a lonely sail maker, nurses an injured crane one blustery night, he never suspects that this simple act of kindness will change his life forever. Weeks later a mysterious woman arrives on his doorstep, seeking shelter from a storm. Osamu again offers his help, and soon the sail maker and the stranger fall in love and marry. But when he learns of his wife’s gift for making magic sails, ambition replaces compassion–and Osamu risks losing the great happiness he has found. With majestic paintings and lyrical prose, this classic Japanese tale speaks to readers of all ages with its timeless lessons on the nature of kindness, love, and betrayal.

The day Finn Maguire discovers his dad bludgeoned to death in a pool of blood, his dreary life is turned upside down. Prime suspect in his father’s murder, Finn must race against time to clear his name and find out who hated his dad enough to kill him.

Scouring the sordid, brutal London underworld for answers, exposing dark family secrets, and facing danger at every turn, Finn is about to learn that it’s the people you trust who can hit you the hardest. . .

Crusher is this year’s most talked-about debut thriller. 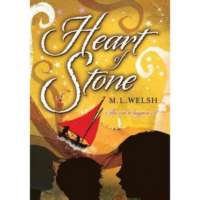 When a strange white sand invades the harbor town of Wellow and land begins shifting, Verity Gallant finds clues in ancient books and, with her friends, tries to stop the Earth Witch’s evil plan to deprive the world of happiness as she was once robbed of her true love .

Young readers (and adults, too) will feel transported by the clever, intricate plotline and superb, sweeping illustrations of this second title in the Three Thieves series. The action resumes as our three goodhearted fugitives stop at a roadside inn during a ferocious thunderstorm. Narrow escapes ensue as Grig, the scheming and selfish innkeeper, endeavors to capture the trio and secure a reward from the Queen. Tensions mount further as the Queen’s Dragons arrive at the tavern, hot on the trail of the fugitives and immediately suspicious of the smarmy Grig. Will Grig get his due? Will the fugitives escape? And why hasn’t Grig’s gentle wife spoken a word in ten years? You can bet she’s got a secret.

A story of loyalties tested, secrets exposed, and one boy’s search for identity amid the tangled political intrigue and deception of the Dark Ages. A young thief known as “the Ghost” roams seventh-century Constantinople, tangling in political feuds and petty theft, using his eerie gifts of persuasion and stealth. With his father away at war and his mother devastated by his little sister’s death, Cai would rather be anywhere than at home. But when a rival ambushes and sells Cai as a slave, he begins to regret his choices. Aboard the slavers’ ship, Cai travels far from the warmth of Constantinople into his parents’ homeland, the forbidding land of Britain, where war is brewing between tribes. Bought by a clan head, Cai finds a new life as a tribal member, and using his uncanny talents, is put to work as a spy. The secrets he discovers, however, kindle doubt and disloyalty in his heart. Adrift in a society he still feels apart from, Cai seeks truth and revenge, throwing his life to the wind with startling results.

The Arthurian legend springs to life in another powerhouse graphic novel from the creators of OUTLAW: THE LEGEND OF ROBIN HOOD. Arthur Pendragon was raised in obscurity, but fate will not leave him to the shadows. In a moment of desperate need, he draws a legendary sword from its stonebed and commences the life he was born to lead. A series of adventures sparked by the elusive wizard Merlin launches Arthur through love and betrayal, domination and defeat, and toward the prophesied end awaiting him. Merging a faithful retelling with dynamic illustrations, EXCALIBUR invites long-time fans to relive the legend and those new to the story to experience it up close in a vivid graphic adventure.

The future looks bleak indeed for 16-year-old Gloria. Living in a poor area of Accra, she dreams of becoming a dressmaker, but after failing 13 out of 15 subjects on her final exams it seems unlikely to happen. Then a distant relative, Christine, offers to move Gloria to Kumasi to look after her son. In exchange, Christine will pay for Gloria to go to dressmaking school. In Kumasi everything seems possible, and life is grander than anything Gloria has ever experienced. But Kumasi is also full of temptations, like the popular boutique where the owner takes a fancy to Gloria and encourages her to buy clothes on credit. There’s also the smooth-talking Dr. Kusi, who gives Gloria rides in his red Passat and invites her to bring food to his apartment. Eventually betrayed by those around her, Gloria must reconcile her future, her family, and her desires.

When Demi–a master pickpocket working for the gang leader Fay–steals a ring, his partner in crime, Baz, soon finds herself alone and betrayed as police and the Barrio’s crime boss close in on Fay and her den of child thieves.

Deep in a forsaken wood, a wild man keeps watch over a golden spring. Iron Hans is nine feet tall and as brown as rust, with hair to his knees. He is cursed, a terror to all, until a young prince finds the courage to befriend him. But when the boy betrays Iron Hans’s trust, he must make his way in the world alone, penniless and unknown — save for a little help from a certain forgiving wild man.